Capacitance is defined as the capability of an element to store electric charge. A capacitor store electric energy in the form of the electric field by the two electrodes of a capacitor, one as positive and other as negative.

In other words, capacitance is a measure of charge per unit voltage that can be stored in an element. It is denoted by (C), and its unit is Farad (F).

Explanation and Derivation of Capacitance

If the two parallel plates are connected, overlapping each other and are connected to a DC supply voltage as shown in the figure. The two plates are separated by an insulating dielectric so that the charge does not cross each other. One terminal of the parallel plate is connected to the positive supply and other to the negative supply. As the supply is ON, the capacitor starts charging, and it stores energy even if the supply is OFF. 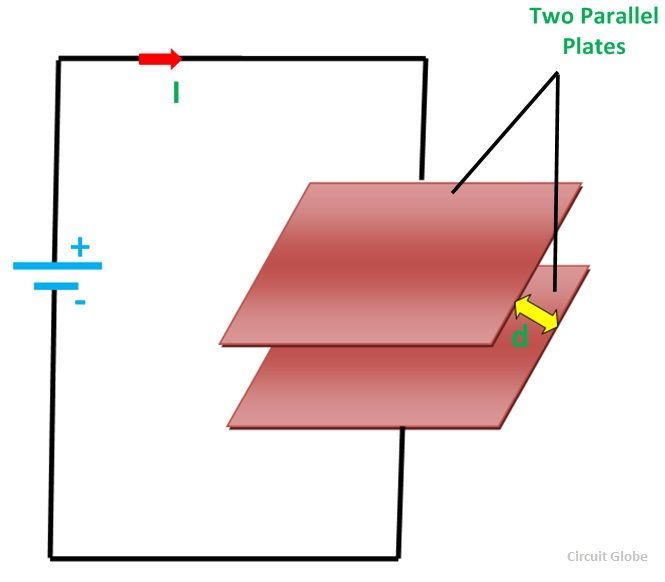 The capacitance equation is given by:

The capacitance is said to be one farad if one coulomb of charge is stored with one volt across the two electrodes of the element. The element which has capacitance is called a capacitor.

The Charge on the capacitor at any instant of time is

q is the amount of charge that can be stored in a capacitor of capacitance (C) against a potential difference of (v) volts.

Where i, q and v represents the instantaneous value of current, charge and voltage respectively.

v0 is the initial voltage of the capacitor

vt is the final voltage of the capacitor

The energy stored by the capacitor is given as

The capacitor only stores energy and never dissipate the energy in any form. It can store a finite amount of energy, even if the current through the capacitor is zero.

The various types of capacitor are as follows:

Series and Parallel Capacitance in a Circuit

If the number of capacitors, for example, C1, C2, C3…..connected together in a series is called a series capacitor circuit. The current flowing in this type of circuit will be the same across all the capacitors as they are connected in series. The series connection of the capacitor is shown below in the figure:

The equivalent capacitance is given by the equation as: 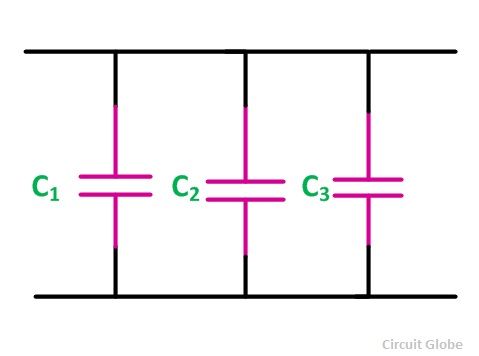 The equivalent capacitance in a parallel circuit is given by the equation shown below:

This is all about capacitance.