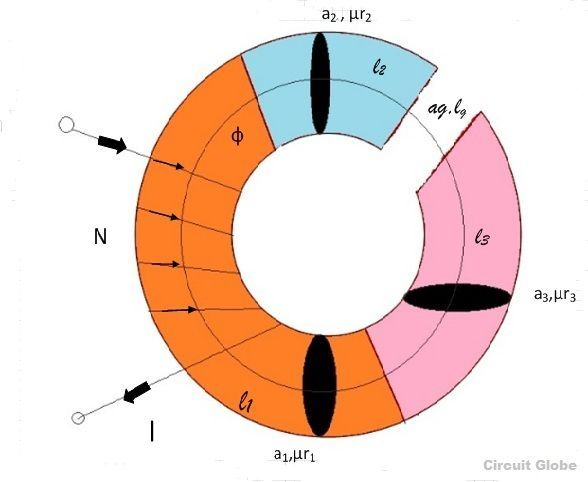 Current I is passed through the solenoid having N number of turns wound on the one section of the circular coil. Φ is the flux, set up in the core of the coil.

a1, a2, a3 are the cross-sectional area of the solenoid.

l1, l2, l3 are the length of the three different coils having different dimension joined together in series.

ag and are the area and the length of the air gap.

The total reluctance (S) of the magnetic circuit is

Putting the value of S in equation (1) we get,

The value of H for the air gap part will always µg = B/µ0.

The graph plotted between the flux density (B) and the magnetising force (H) of any material is called B-H Curve or the magnetisation curve.

But for the non-magnetic materials like plastic, rubber, etc. and for the magnetic circuit having an air gap, its value is constant, denoted by (µ0). Its value is 4πx10-7 H/m and commonly known as absolute permeability or permeability of free space.

B-H curve for the various material like cast iron, cast steel and sheet steel is shown in the above figure.