Definition: The multimeter or volt-ohm-milli-ammeter (VOM) is the type of meter which performs the multiple functions. In other words, in VOM the multiple measuring functions are combined in a single unit. The multimeter is used for measuring voltage, current and resistance. It contains the circuitry switch which makes the meter to operate like a voltmeter, ammeter, and as an ohmmeter.

Consider the circuit of the Simpsons multimeter. The multimeter is the combination of DC voltmeter, AC voltmeter, multirange ohmmeter, and an output meter. 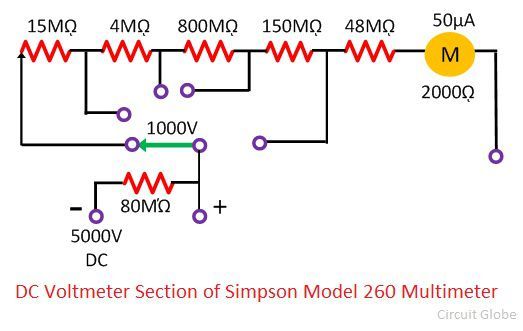 The circuit below shows the resistance measuring section of the multimeter. The sensitivity of the instrument is very high, and because of this reason, the meter is commonly used in the general measurement.

The circuit for DC Ampere and the milliampere is shown in the figure below. The maximum temperature range for measuring the current is from 500mA. The circuit whose current is used to be measured is connected to the positive and negative terminal of the below-shown circuit. 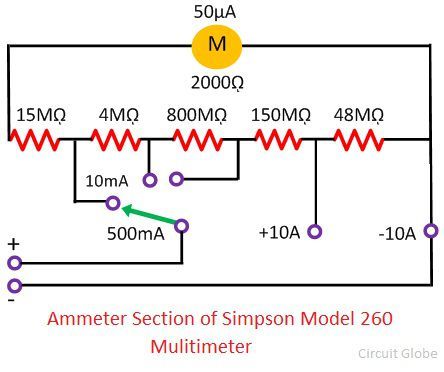 The resistance of the ohmmeter section is shown in the figure below. The circuit has a zero adjustable switch whose value varies until the meter shows the zero resistance. 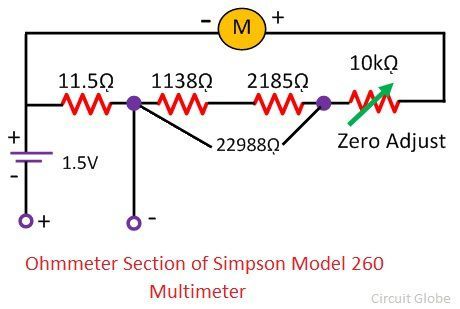