Definition: The ammeter shunt is the device which provides the low resistance path to the flow of current. It connects in parallel with the ammeter. In some of the ammeter, the shunt is inbuilt inside the instrument while in others it is externally connected to the circuit.

Why Shunt Connect in parallel with Ammeter?

The shunt connects in parallel to the ammeter because of which the voltage drops across the meter and shunt remain the same. Thus, the movement of the pointer is not affected by the shunt. 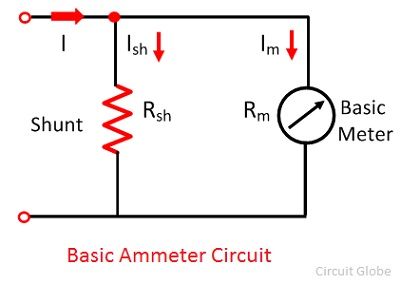 As the shunt connects in parallel with the ammeter, thus the same voltage drop occurs between them.

The shunt current is

Therefore the equation of shunt resistance is given as,

The ratio of the total current to the current requires the movement of the ammeter coil is called the multiplying power of the shunt.

The multiplying power is given as,

The resistance of shunt becomes,

The following are the requirements of the shunt.

Magainin and Constantan use for making the shunt in the DC and AC instruments respectively.