Consider an ammeter has its resistance Rm and it measured only a small current Im.  A shunt resistor Rs is placed in parallel with the ammeter for extending their range. 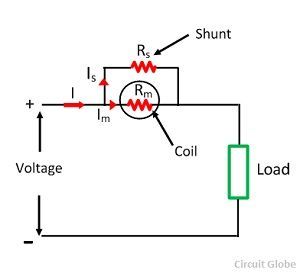 Let, Rs = Shunt resistance
Is = Shunt current
I = total load or circuit current to be measured

Since shunt is in parallel with ammeter,

From above equation we get,

Where N is the ratio of the total current (I) to be measured to the full-scale deflection current Im is known as the multiplying power of the shunt.