Definition: The sequence impedance network is defined as a balance equivalent network for the balance power system under an imagined working condition so that only single sequence component of voltage and current is present in the system. The symmetrical components are useful for computing the unsymmetrical fault at different points of a power system network. The positive sequence network determines the load flow studies in power system. 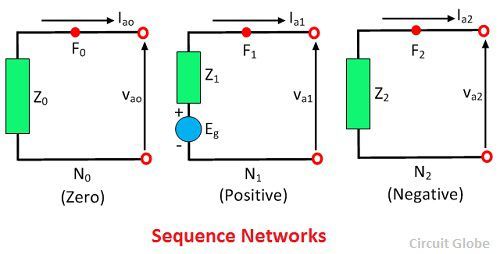 For positive sequence network, the Thevenin voltage is the open circuit voltage VF at point F. The voltage Vf is the pre-fault voltage in phase a, at the fault point F. The Eg also represents it. Thevenin voltage in negative and zero sequence networks are zero because the negative and zero sequences voltage at the fault point are zero in the balanced system.

The current Ia flows from the system into the fault, thus its component Ia0, Ia1, and Ia2 flow away from the fault point F. The symmetrical component of the voltage at the fault  point may be written as

Where Z0, Z1 and the Z2 are the total equivalent impedance of the zero, positive and negative sequence network up to the fault point.