Definition: The power system is a network which consists generation, distribution and transmission system. It uses the form of energy (like coal and diesel) and converts it into electrical energy. The power system includes the devices connected to the system like the synchronous generator, motor, transformer, circuit breaker, conductor, etc. 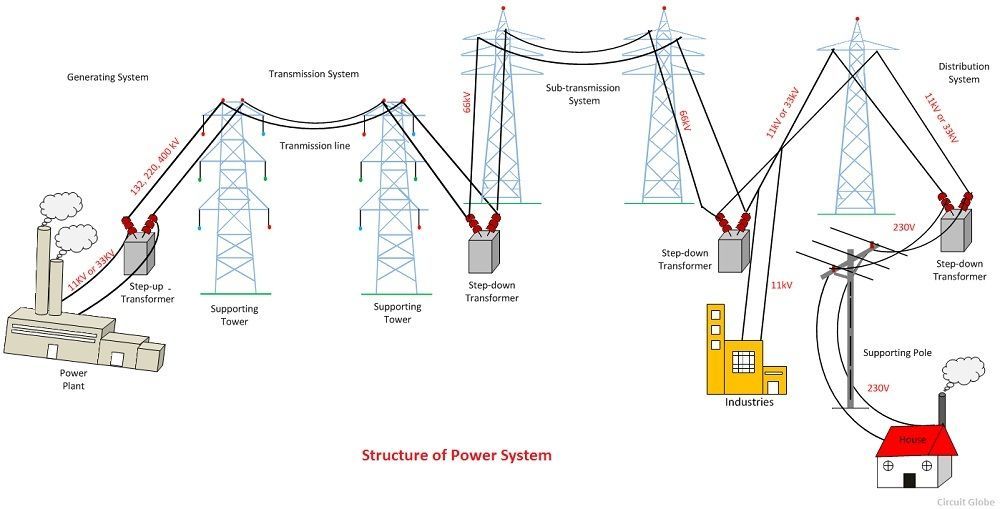 The power system is the complex enterprise that may be subdivided into the following sub-systems.The subsystems of the power system are explained below in details.

In generating station the fuel (coal, water, nuclear energy, etc.) is converted into electrical energy. The electrical power is generated in the range of 11kV to 25kV, which is step-up for long distance transmission. The power plant of the generating substation is mainly classified into three types, i.e., thermal power plant, hydropower plant and nuclear power plant.

The transmission substation carries the overhead lines which transfer the generated electrical energy from generation to the distribution substations. It only supplies the large bulk of power to bulk power substations or very big consumers.

The component of an electrical power system connecting all the consumers in an area to the bulk power sources is called a distribution system.The bulk power stations are connected to the generating substations by transmission lines. They feed some substations which are usually situated at convenient points near the load centres.

The substations distribute the power to the domestic, commercial and relatively small consumers. The consumers require large blocks of power which are usually supplied at sub-transmission or even transmission system.