Consider a synchronous machine connected to an infinite bus through a transmission line of reactance Xl shown in a figure below. Let us assume that the resistance and capacitance are neglected.

Equivalent diagram of synchronous machine connected to an infinite bus through a transmission line of series reactance Xl is shown below:

The complex power delivered by the generator to the system is

Active power transferred to the system

The reactive power transferred to the system 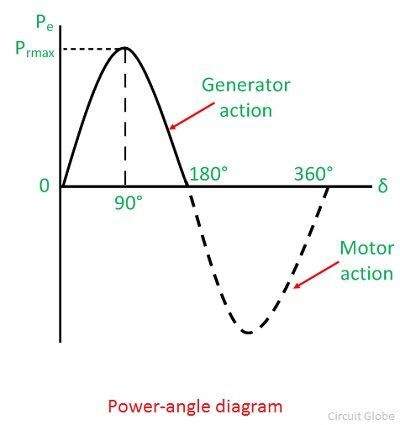 Maximum power is transferred when δ = 90⁰. As the value of load angle δ is above 90, Pe decrease and becomes zero at δ = 180⁰. Above 180⁰, Pe becomes negative, which show that the direction of power flow is reversed, and the power is supplied from infinite bus to the generator. The value of Pe is often called pull out power. It is also called the steady-state limit.