Definition: The overhead earth wire or ground wire is the form of lightning protection using a conductor or conductors. It is attached from support to support above the transmission line and well grounded at regular interval. The earth wire intercepts the direct lightning strikes, which would strike the phase conductors. The ground wire has no effect on switching surges.

When the lightning strikes an earth wire at mid-span, waves are produced which travel in opposite directions along the line. The waves reach the adjoining tower, which passes them to earth safely.The earth wire is effective only when the resistance between the tower foot and earth is sufficiently low. 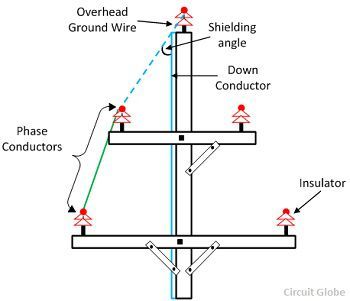 If the resistance between them is not low and the earth wire or tower will be struck by the lighting, then the lighting will be raised to the very high potential, which will cause a flash over from the tower to one or more phase conductors. Such a flashover is known as back flashover.

The back flash over only occurs when the product of the tower conductor and tower impedance exceeds the insulation levels of the line. It can be minimised by reducing tower footing resistance using driven rods and counterpoises where soil resistivity is high.

Parallel Counterpoise – The parallel counterpoise is made up of one or more counterpoise buried under the transmission line through its length. The counterpoise line connected through the over earthed wire at all the towers and poles. 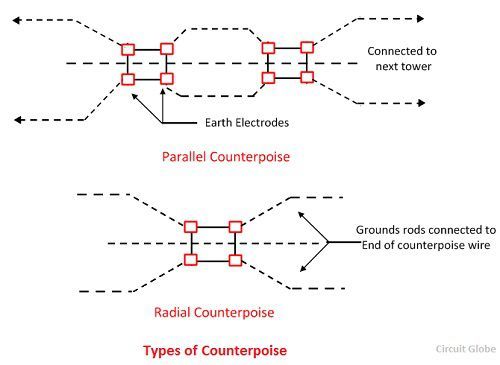 Radial Counterpoise – The radial type counterpoise is made up of many wires extending radially from the tower legs.The number and length of wires are determined by the tower location and soil conditions. 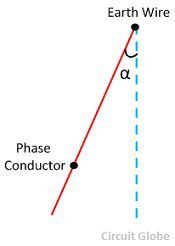 For effective shielding, the protective angle should be kept as small as possible. The angle between 20° and 30° is quite safe, and it should not be kept above 40°.

Two wires are used in modern high voltage system with wider spacing between the conductor. The protection afforded by the two wire earth wire is much better than the single wire. Also, the surge impedance for two earth wires is low and the coupling effect  of the wire increases.