The rotor of the generator is normally unearthed i.e. remain isolated from the earth and therefore the single fault due to insulation breakdown will not rise the fault current. A single fault will not affect the rotor, but if the fault occurs, continues then it will damage the field winding of the generator. For a large generator, the rotor earth fault protection system is used for the protection of the field winding.

When the one earth fault occurs in the rotor then it is not necessary that the system is completely trip, only the relay indicates that the fault has occurred. So that the generator should be taken out of service at leisure. The methods of rotor earth fault protection are explained below.

In this method, a high resistance is connected across the field winding of the rotor.The midpoint of the resistor is grounded through a sensitive relay. When the fault occurs the relay detect the fault and send the tripping command to the breaker. 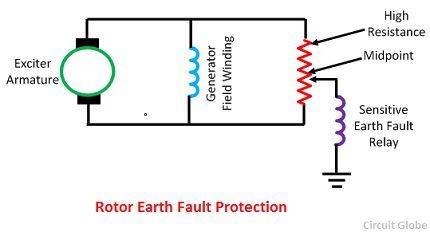 The major disadvantage of such type of system is the leakage current that flows through the capacitor. This current unbalanced  the magnetic field and increase the stress on the magnetic bearing. Another disadvantage of alternating current is that the relay cannot pick up the current that normally flow through the capacitance to the ground. Thus, the care must be taken to avoid resonance between the capacitance and the relay inductance. 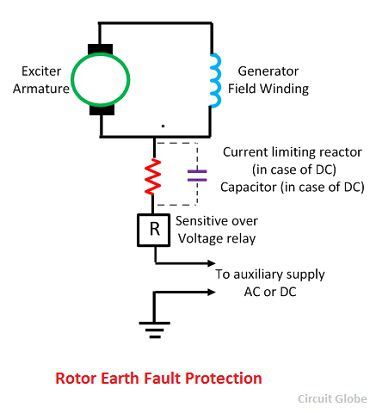