The resistivity of the soil is usually measured by the four spike methods. In this method the four spikes arranged in the straight line are driven into the soil at equal distance. A known current is passed between electrode C1 and C2 and potential drop V is measured across P1 and P2. The current I developed an electric field which is proportional to current density and soil resistivity. The voltage V is proportional to this field. 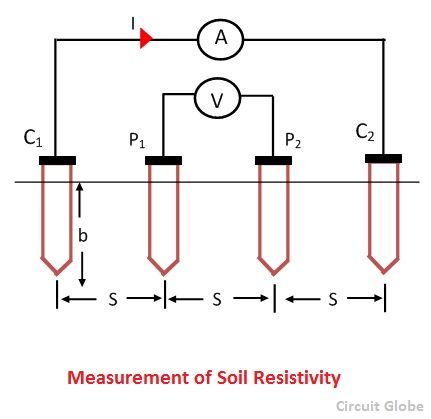 Where ρ is the resistivity of the soil and their unit is ohmmeters. S is the horizontal space between the spikes in m and b is the depth of burial  in metre.

If the measurement is to be carried out using the main supply, an isolating transformer should be connected between the main supply and the test setup. So that the result may not be affected by it.