Definition: The system which uses the direct current for the transmission of the power such type of system is called HVDC (High Voltage Direct Current) system. The HVDC system is less expensive and has minimum losses. It transmits the power between the unsynchronized AC system.

Component of an HVDC Transmission System

The HVDC system has the following main components. 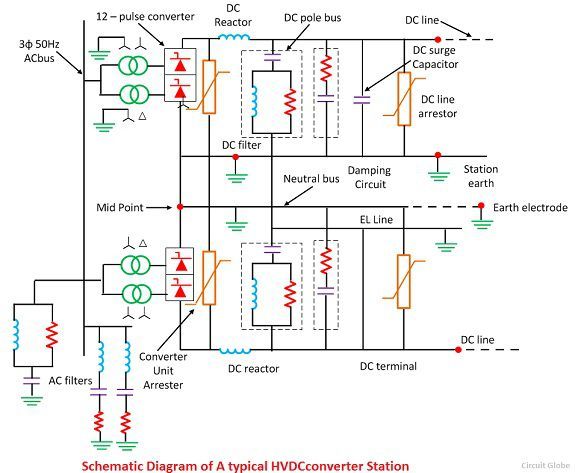 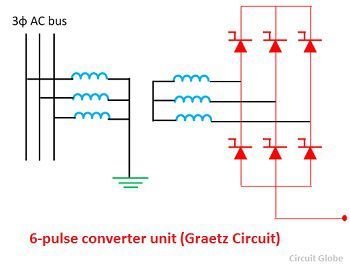 The modern HVDC converters use 12-pulse converter units. The total number of a valve in each unit is 12. The valve is made up of series connected thyristor modules.The number of thyristor valve depends on the required voltage across the valve. The valves are installed in valve halls, and they are cooled by air, oil, water or freon. 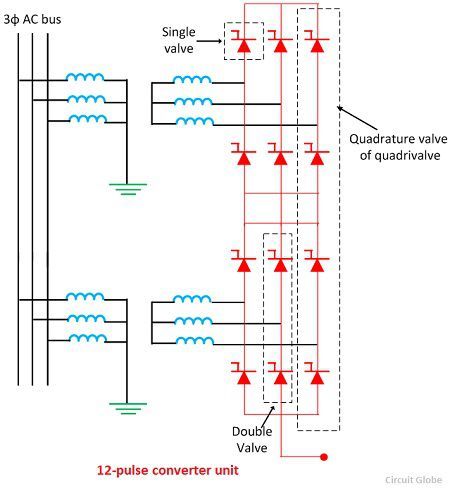 The AC side windings of the two, three phase transformer are connected in stars with their neutrals grounded. The valve side transformer winding is designed to withstand alternating voltage stress and direct voltage stress from valve bridge. There are increases in eddy current losses due to the harmonics current. The magnetisation in the core of the converter transformer is because of the following reasons.

The harmonics are minimised by using the AC, DC and high-frequency filters. The types of filter are explained below in details.

Reactive power is required for the operations of the converters. The AC harmonic filters provide reactive power partly. The additional supply may also be obtained from shunt capacitors synchronous phase modifiers and static var systems. The choice depends on the speed of control desired.

Smoothing reactor is an oil filled oil cooled reactor having a large inductance. It is connected in series with the converter before the DC filter. It can be located either on the line side or on the neutral side. Smoothing reactors serve the following purposes.

The HVDC system pole is the part of an HVDC system consisting of all the equipment in the HVDC substation. It also interconnects the transmission lines which during normal operating condition exhibit a common direct polarity with respect to earth. Thus the word pole refers to the path of DC which has the same polarity with respect to earth. The total pole includes substation pole and transmission line pole.

Types of an HVDC System

The different types of an HVDC system are explained below in details.

The HVDC system which transfers energy between the AC buses at the same location is called back-to-back system or an HVDC coupling system. In back-to-back HVDC stations, the converters and rectifiers are installed in the same stations. It has no DC  transmission line.

The back-to-back system provides an asynchronous interconnection between the two adjacent independently controlled AC networks without transferring frequency disturbances. The back-to-back DC link reduces the overall conversion cost, improve the reliability of the DC system. Such type of system is designed for bipolar operation.

The terminal with two terminals (converter station) and one HVDC transmission line is called two terminal DC system point-to-point system. This system does not have any parallel HVDC line and no intermediate tappings. The HVDC circuit breaker is also not required for two-terminal HVDC system.The normal and abnormal current is controlled effective converter controller.

The following are the advantages of MTDC systems

The following are the applications of the HVDC systems