Definition: High voltage direct current (HVDC) power systems use D.C. for transmission of bulk power over long distances. For long-distance power transmission, HVDC lines are less expensive, and losses are less as compared to AC transmission. It interconnects the networks that have different frequencies and characteristics.

In a combined AC and DC system, generated AC voltage is converted into DC at the sending end. Then, the DC voltage is inverted to AC at the receiving end, for distribution purposes. Thus, the conversion and inversion equipment are also needed at the two ends of the line. HVDC transmission is economical only for long distance transmission lines having a length more than 600kms and for underground cables of length more than 50kms.

How does HVDC transmission system work?

In generating substation, AC power is generated which can be converted into DC by using a rectifier. In HVDC substation or converter substation rectifiers and inverters are placed at both the ends of a line. The rectifier terminal changes the AC to DC, while the inverter terminal converts DC to AC.

The DC is flowing with the overhead lines and at the user end again DC is converted into AC by using inverters, which are placed in converter substation. The power remains the same at the sending and receiving ends of the line. DC is transmitted over long distances because it decreases the losses and improves the efficiency.

DC lines are cheaper than the AC lines, but the cost of DC terminal equipment is very high as compared to AC terminal cables (shown in the graph below). Thus, the initial cost is high in HVDC transmission system, and it is low in the AC system. 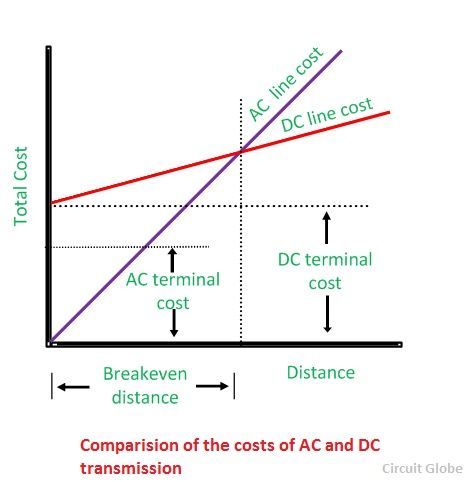 Considering all the advantages of DC, it seems that HVDC lines are more proficient than AC lines. But, the initial cost of HVDC substation is very high and their substation equipment is quite complicated.Thus, for long distance transmission it is preferable that power is generated in AC, and for transmission, it is converted into DC and then again converted back into AC for final use. This system is economical and also improves the efficiency of the system.