The alternating voltage is generated in two ways.

Consider the stationary coil places inside the uniform magnetic field. The load is connected across the coil with the help of brushes and the slip rings. When the coil rotates in the anticlockwise direction at constant angular velocity ω the electromotive force induces in the coil. The cross-sectional view of the coil at the different position is shown in the figure below. 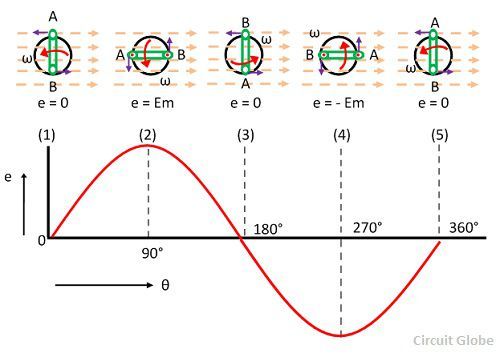 The magnitude of the induces emf becomes maximum when the conductor becomes perpendicular to the magnetic line of force. The conductor cuts the maximum flux at this position.

In other words, the direction of emf induces in the conductor at position (2) and (4) becomes opposite to each other.

2 thoughts on “Generation of Alternating Voltage”