The three-phase power is mainly used for generation, transmission and distribution of electrical power because of their superiority. It is more economical as compared to single-phase power and requires three live conductors for power supply. Power in a single-phase system or circuit is given by the relation shown below:

In 3 phase circuits (balanced load), the power is defined as the sum of various powers in a three-phase system. i.e.

The phase voltage and line voltage in the star connection is represented as shown below:

Therefore, equation (1) can be written as:

Power in delta connections in 3 phase circuits is given by the equation shown below:

Hence, equation (3) can be written as

Thus, the total power in a 3 phase balanced load system, irrespective of their connections, whether the system is star connected or delta connected, the power is given by the relation:

Its units are kilowatt (kW) or Watt (W).

Apparent Power is given as:

Similarly, Reactive Power is given by the equation:

Generation of 3 Phase E.M.Fs in a 3 Phase Circuit

In a 3 phase system, there are three equal voltages or EMFs of the same frequency having a phase difference of 120 degrees. These voltages can be produced by a three-phase AC generator having three identical windings displaced apart from each other by 120 degrees electrical. 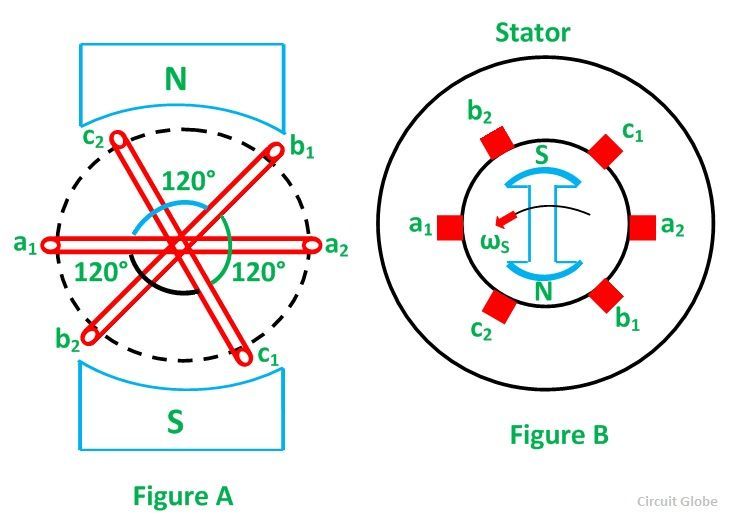 Consider three identical coils a1a2, b1b2 and c1c2 as shown in the above figure. In this figure a1, b1 and c1 are the starting terminals, whereas a2, b2 and c2 are the finish terminals of the three coils. The phase difference of 120 degrees has to be maintained between the start terminals a1, b1 and c1.

Now, let the three coils mounted on the same axis, and they are rotated by either keeping coil stationary and moving the magnetic field or vice versa in an anticlockwise direction at (ω) radians per seconds. Three EMFs are induced in the three coils respectively. 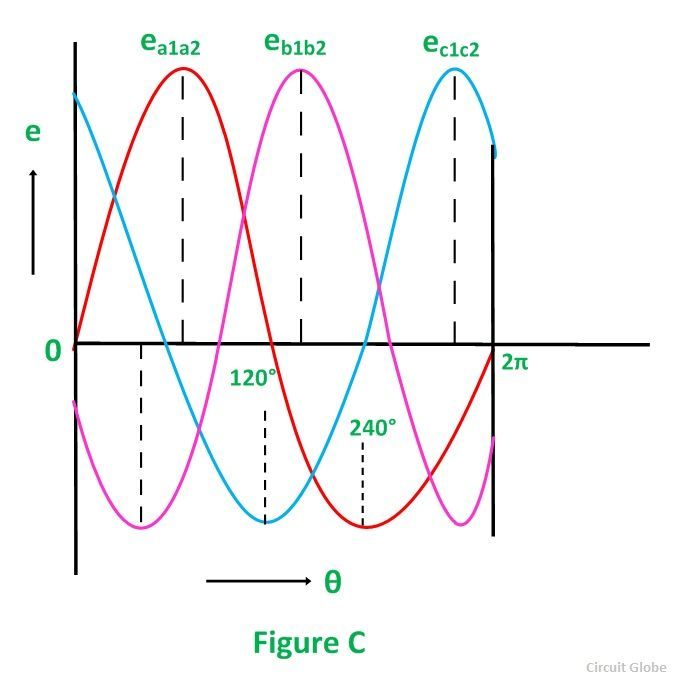 Considering the figure C, the analysis of their magnitudes and directions are given as follows:

The emf induced in the coil a1a2 is zero and is increasing in the positive direction as shown by the waveform in the above figure C represented as ea1a2.

The coil b1b2 is 120 degrees electrically behind the coil a1a2. The emf induced in this coil is negative and is becoming maximum negative as shown by the wave eb1b2.

The EMFs induced in the three coils in 3 phase circuits are of the same magnitude and frequency and are displaced by an angle of 120 degrees from each other as shown below in the phasor diagram: 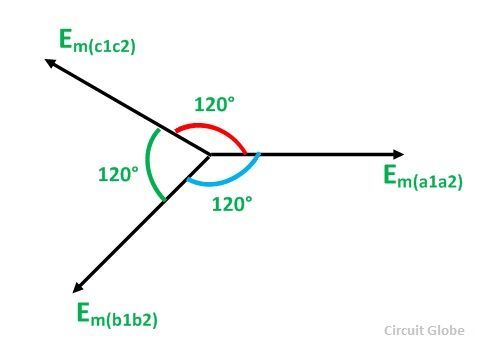 These EMFs of 3 phase circuits can be expressed in the form of the various equations given below:

This is all about Generation of 3 Phase Power in 3 Phase Circuits.