The Nodal Voltage Analysis is a method to solve the electrical network. It is used where it is essential to compute all branch currents.The nodal voltage analysis method determines the voltage and current by using the nodes of the circuit.

A node is a terminal or connection of more than two elements. The nodal voltage analysis is commonly used for networks having many parallel circuits with a common terminal ground.

This method requires less number of the equation for solving the circuit.

In writing the current expression, the assumptions are made that the node potentials are always higher than the other voltages appearing in the equations.

Let us understand the Nodal Voltage Analysis Method with the help of an example shown below: 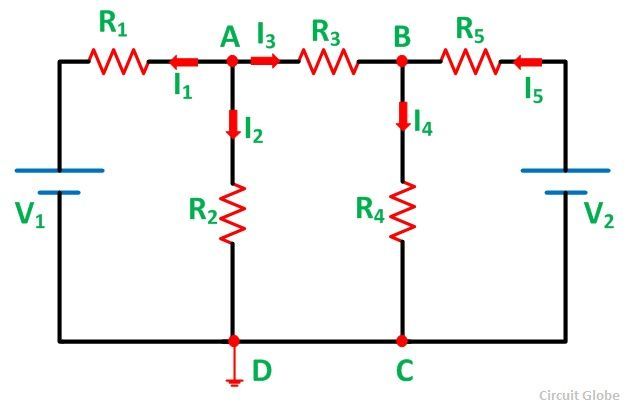 Considering the above circuit diagram, the following steps are explained below

Applying KCL at node A, we have

Applying KCL at the node B, we have

Solving equation (1) and the equation (2) we will get the value of VA and VB.

The nodal voltage analysis has the advantage that a minimum number of equations needs to be written to determine the unknown quantities.