Mesh Current Analysis Method is used to analyze and solve the electrical network having various sources or the circuit consisting of several meshes or loop with a voltage or current sources. It is also known as the Loop Current Method.

In the Mesh Current method, a distinct current is assumed in the loop and the polarities of drops in each element in the loop are determined by the assumed direction of loop current for that loop.

The unknown in mesh current analysis is the current in different meshes, and the law which is applicable to solve the circuit by the mesh current method is known as Kirchhoff’s Voltage Law (KVL) which states that – 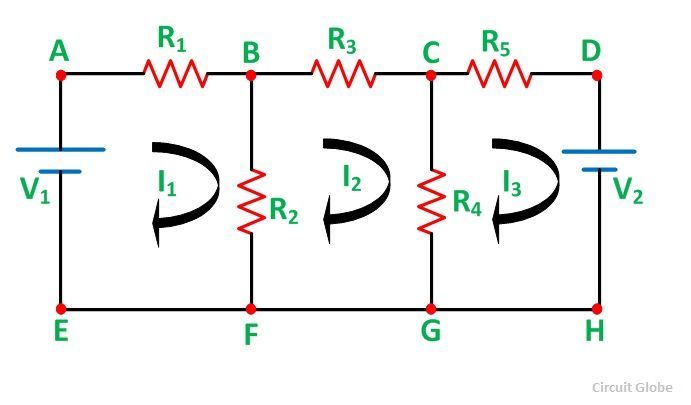 In the above network

The direction of the current is assumed in the clockwise for simplicity in solving the network.

Considering the above circuit diagram, the following steps are given below to solve the circuit by the Mesh Current method.

Step 1 – First of all, identify the independent circuit meshes or loop.
.As there is three mesh in the circuit diagram shown above which are considering.

Step 2 – Assign a circulating current to each mesh as shown in circuit diagram where I1, I2 and I3 are flowing in each mesh.
It is preferable to assign the same direction of all the currents and in a clockwise direction for making the calculation easier.

Step 3 – Now, write the KVL equation for each mesh.
As there are three meshes in the circuit, there will be three KVL equations as shown below

Applying KVL in the mesh ABFEA

By rearranging the equation, we will get an equation (1)

Applying KVL in the mesh BCGFB

Applying KVL in the mesh CDHGC

Step 4 – Now solve equations (1) (2) and (3) simultaneously to get the value of current I1, I2 and I3.
By knowing the mesh currents, we can determine the various voltages and currents in the circuit.

The above circuit can be solved by the Matrix method also, as shown below

Thus, the equation (4) can be solved to get the values it the various currents.

It is seen from the equation (4) that the resistance matrix [R] is symmetric, i.e.

Equation (5) can be written as:

[R] is the mesh resistance

[I] is the column vector of mesh currents and

[V] is the column vector of the algebraic sum of all the source voltages around the mesh.

This is all about the mesh current analysis method.