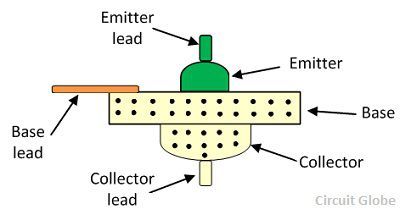 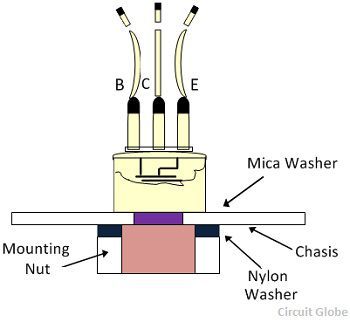 The whole structure is cooled down steadily. After cooling, the region of p-type germanium is produced, and the alloy of indium and germanium is deposited on the layer. The lead of the emitter and collector deposits on the two sides of the wafer as shown in the figure below. Thus, PNP transistor is fabricated.

In this technique, the alternate p-type and n-type impurities are gaseously diffuse into the wafer of semiconductor material at high temperature for forming the emitter and collector junction. The diffusion type silicon transistor is shown in the figure below. 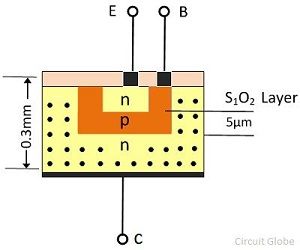 The n-type silicon wafer is used for making the collector terminal. On the surface of the silicon wafer, Silicon oxide (SiO2) is grown. The silicon-di-oxide is an insulating material which does not allow the impurities to enter through it. 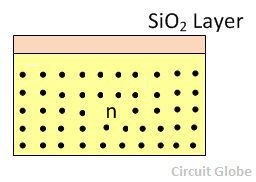 For making the wafer, the acceptor type impurities are diffused into the wafer. For this, the SiO2 layer is removed from the area from where the base is to be spread. The born impurities are exposed in the form of the vapour, and hence the impurity is added to the depth of the material as shown in the figure below. Thus, the base region of P-type material develops.

The another layer of SiO2 material is grown over the entire wafer of the transistor.

The part of SiO2 is grown over shown in the figure below. The layer of SiO2 is again engraved over the wafer of donor type impurities (e.g. Phosphorous). Thus, the n-type emitter region is built.

The metal contacts are engraved on the surface shown above in the figure. The wafer exhibit on the suitable collector contacts and then cut into the required size. 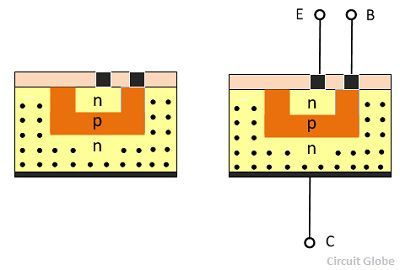 The leads are then connected to the base emitter and collector shown above.