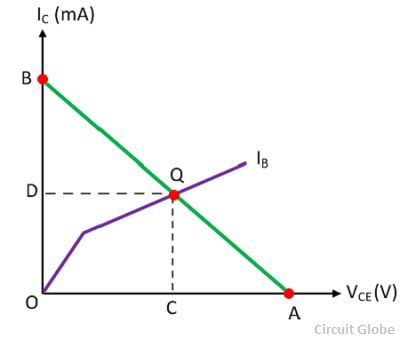 Let, determines the operating point of particular base circuit current IB. According to the load line condition, the OA = VCE = VCC and OB = IC = VCC/RC is shown on the output characteristic curve above. The point Q is the operating point where the DC load line intersects the base current IB at the output characteristic curves in the absence of input signal.

Note: In saturation region, both the collector base region and the emitter-base region are in forward biased and heavy current flow through the junction. And the region in which both the junctions of the transistor are in reversed biased is called the cut-off region.

6 thoughts on “Operating Point in Transistor”