Definition: The transistor in which one p-type material is placed between two n-type materials is known as NPN transistor. The NPN transistor amplifies the weak signal enter into the base and produces strong amplify signals at the collector end. In NPN transistor, the direction of movement of an electron is from the emitter to collector region due to which the current constitutes in the transistor. Such type of transistor is mostly used in the circuit because their majority charge carriers are electrons which have high mobility as compared to holes. 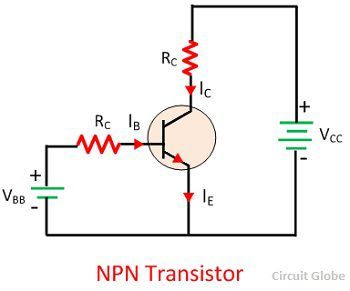 The emitter of the NPN transistor is heavily doped. When the forward bias is applied across the emitter, the majority charge carriers move towards the base. This causes the emitter current IE. The electrons enter into the P-type material and combine with the holes.