The charge carrier of the PN-junction diode absorbs heat from the environment at normal room temperature. When the reverse biased applied across the junction, the kinetic energy of the electrons increases and they starts moving at high velocity. While moving, they collide with the other atoms and creates the number of free electrons which causes the reverse saturation current. Because of this saturation current, the avalanche breakdown mechanism occurs in the diode.

The graphical representation of the Avalanche and Zener breakdown is shown in the figure below. 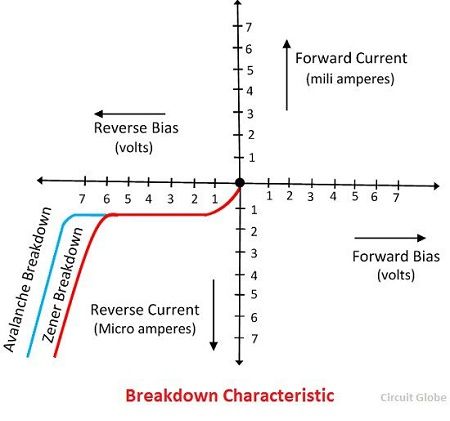 The avalanche breakdown is the breakdown mechanism of the PN – junction diodes which have thinner region. In this breakdown, when the electric field is applied across the diode, the velocity of the charge carrier increases. This charge carrier collides with the other atoms and creates the pairs of hole and electrons.

The voltage of Zener breakdown is less than the Avalanche breakdown.