The various types of losses are explained below in detail. 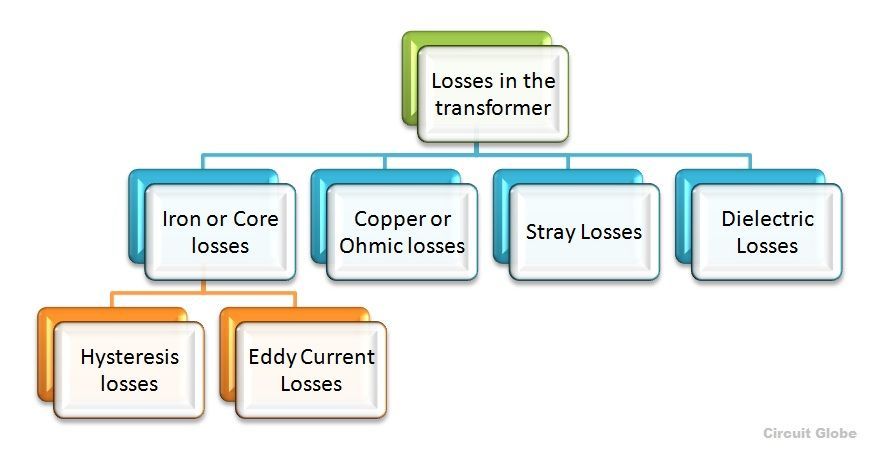 Types of Losses in the Transformer

Iron losses are caused by the alternating flux in the core of the transformer as this loss occurs in the core it is also known as Core loss. Iron loss is further divided into hysteresis and eddy current loss.

The core of the transformer is subjected to an alternating magnetizing force, and for each cycle of emf, a hysteresis loop is traced out. Power is dissipated in the form of heat known as hysteresis loss and given by the equation shown below:

The iron or core losses can be minimized by using silicon steel material for the construction of the core of the transformer.

Since the core is made of conducting material, these EMFs circulate currents within the body of the material. These circulating currents are called Eddy Currents. They will occur when the conductor experiences a changing magnetic field. As these currents are not responsible for doing any useful work, and it produces a loss (I2R loss) in the magnetic material known as an Eddy Current Loss.
The eddy current loss is minimized by making the core with thin laminations.

The equation of the eddy current loss is given as:

Therefore, the total copper losses will be

These losses varied according to the load and known hence it is also known as variable losses. Copper losses vary as the square of the load current.

The occurrence of these stray losses is due to the presence of leakage field. The percentage of these losses are very small as compared to the iron and copper losses so they can be neglected.