Power system consists some synchronous machines operating in synchronism. For the continuity of the power system, it is necessary that they should maintain perfect synchronism under all steady state conditions. When the disturbance occurs in the system, the system develops a force due to which it becomes normal or stable.

The ability of the power system to return to its normal or stable conditions after being disturbed is called stability. Disturbances of the system may be of various types like sudden changes of load, the sudden short circuit between line and ground, line-to-line fault,  all three line faults, switching, etc. 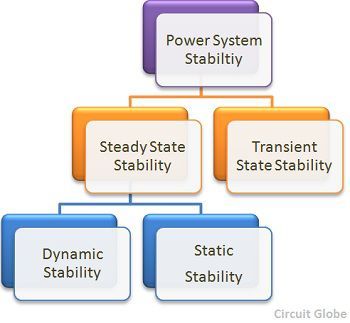 Dynamic stability – It denotes the stability of a system to reach its stable condition after a very small disturbance (disturbance occurs only for 10 to 30 seconds). It is also known as small signal stability. It occurs mainly due to the fluctuation in load or generation level.

Static stability – It refers to the stability of the system that obtains without the aid (benefit) of automatic control devices such as governors and voltage regulators.

Transient stability is conducted when new transmitting and generating system are planned. The swing equation describes the behaviour of the synchronous machine during transient disturbances.

The transient and steady-state disturbances occur in the power system are shown in the graph below. These disturbances reduce the synchronism of the machine, and the system becomes unstable. 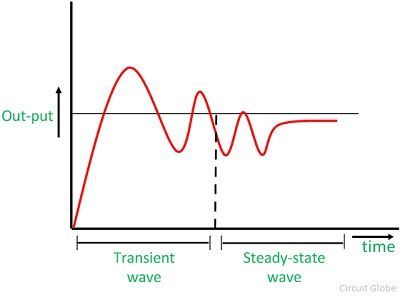 Stability studies are helpful for the determination of critical clearing time of circuit breakers, voltage levels and a transfer capability of the systems.