The platinum is an unreactive metal and can easily be drawn into fine wires. Because of these properties of platinum, it is used as a sensing element in thermometer.

The figure below shows the platinum resistance thermometer. The platinum sensing coil is enclosed inside a bulb which is either made of glass or Pyrex. The insulator deposit on the surface of the glass tube is also used for sensing the temperature. 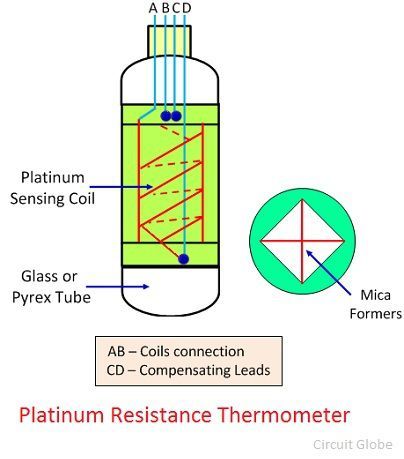 In this PTR, the double wire of the platinum is wound on the strip of the mica. Here the double wires are used for reducing the inductive effect. The mica is used as an insulator, and it is placed at the ends of the tube.

The Ebonite cap is placed at the open end of the tube. The terminals of the copper wire are joined together with the help of the thick copper lead. The other end of the copper leads are joined to the terminal AB fitted in the Ebonite cap. For reducing the effect of copper wire resistance on the thermometer, the two similar copper wires are connected to the upper-end terminals called CD. These wires are called the compensating lead.

The industrial type thermometer is shown in the figure below. The platinum wire is protected by the stainless steel tube or by the glass coating. Glass or ceramic seal the sensing element. The sealing has two advantages. They provide the strength to the thermometer and protects the sensing element against the chemical reaction. 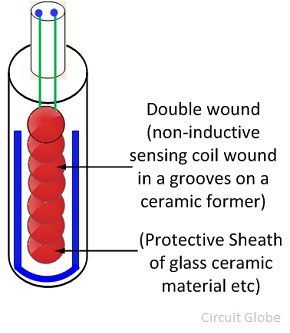 The following are the disadvantages of platinum thermal resistance.

When the thermometer constructed carefully, it provides the excellent sensitivity and high range of measurement.