The working principle of bimetallic thermometer depends on the two fundamental properties of the metal.

The bimetallic strip is constructed by bonding together the two thin strips of different metals. The metals are joined together at one end with the help of the welding. The bonding is kept in such a way that there is no relative motion between the two metals. The physical dimension of the metals varies with the variation in temperature.

The figure below shows the bimetallic strip in the form of the straight cantilever beam. The strip fixed at one end and deflects at the other end. 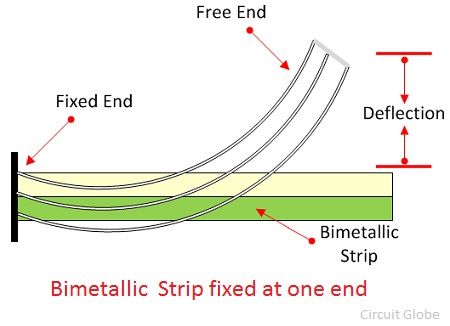 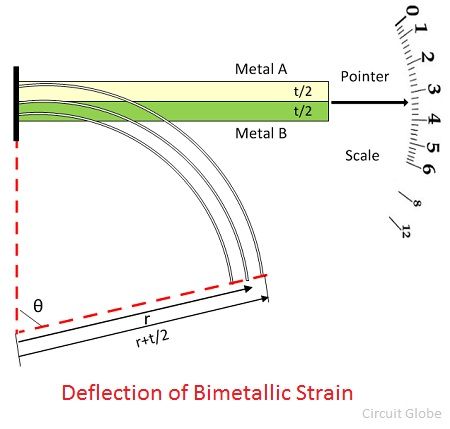 Let understands this with the help of the mathematical formula. Consider the bimetallic strip is made of two different metals, i.e., metal A and metal B. Both the metals have a different temperature coefficient. The T2 – T1 shows the variation of temperature, which causes the expansion of the string.

The expansion causes the strip to move in the uniform circular arc. The radius of the arm is given by the formula shown below.

Consider the strip is fixed at one end and free to move at the other end. When the temperature surroundings the strip vary, the strip bends towards the circular arc.

Consider the strip is made of the metal having thickness t/2. 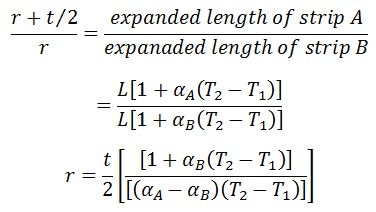 If one of the metals has the very small temperature coefficient, then the

Above equation shows that if one end of the metal is fixed, the deflection of the free end of metals shows the variation of temperature. This thermometer is not used for industrial application because of low sensitivity and small deflection. The sensitivity of the thermometer increases with the increase of the length of the strip. 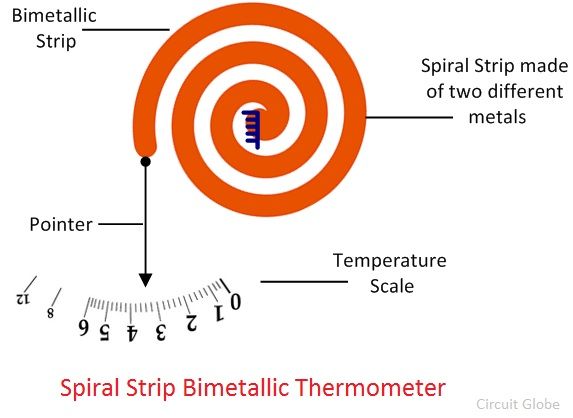 Helical Types Bimetallic Strip – The helix type bimetallic strip is mostly used for industrial applications. In this thermometer, the helix shape strip is used for measuring the temperature. The free end of the strip is connected to the pointer. The deflection of the strip shows the variation of temperature. 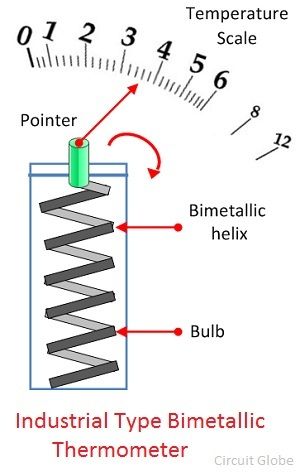 The thermometer is simple in construction, robust and less expensive.

The thermometer gives the less accurate result while measuring the low temperature.