The RTD material is made of platinum, nickel or alloys of nickel. The nickel wires are used for a limited temperature range, but they are quite nonlinear.

The following are the requirements of the conductor used in the RTDs.

The resistance versus temperature curve is shown in the figure below. The curves are nearly linear, and for small temperature range, it is very evident. 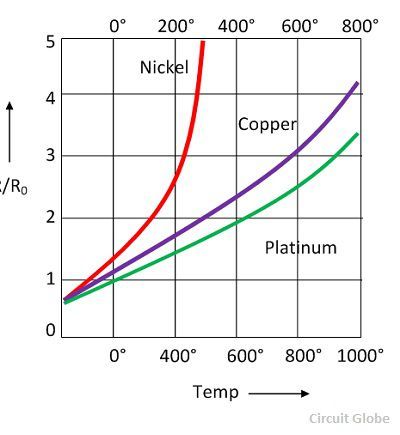 The lead wire is used for connecting the resistance element with the external lead. The lead wire is covered by the insulated tube which protects it from short circuit. The ceramic material is used as an insulator for high-temperature material and for low-temperature fibre or glass is used.

The linear approximation is the way of estimating the resistance versus temperature curve in the form of the linear equation.

The resistance thermometer is very less sensitive, and the metal used for making the resistive element is less expensive.