Definition: Load equalisation is the process of smoothing the fluctuating load. The fluctuate load draws heavy current from the supply during the peak interval and also cause a large voltage drop in the system due to which the equipment may get damage. In load equalisation, the energy is stored at light load, and this energy is utilised when the peak load occurs. Thus, the electrical power from the supply remains constant.

The load fluctuation mostly occurs in some of the drives. For example, in a pressing machine, a large torque is required for a short duration. Otherwise, the torque is zero. Some of the other examples are a rolling mill, reciprocating pump, planning machines, electrical hammer, etc.

When the load is light, the flywheel accelerated and stored the excess energy drawn from the supply. During the peak load, the flying wheel decelerates and supply the stored energy to the load along with the supply energy. Hence the power remains constant, and the load demand is reduced.

Moment of inertia of the flying wheel required for load equalisation is calculated as follows. Consider the linear motor speed torque curve as shown in the figure below.

Assumed the response of the motor is slow due to large inertia and hence applicable for transient operation. Differentiate the equation (1) and multiply both sides by J (moment of inertia). 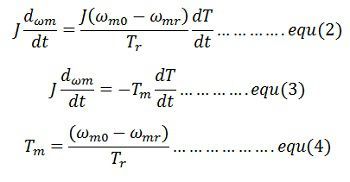 Where Τm is the mechanical time constant of the motor. It is the time required for the motor speed to change by (ωm0 – ωm) when motor torque is maintained constant at rated value ᴛr. From equation(2) and (3)

When operating at steady state the motor torque at the end of a cycle will be the same as at the beginning of a cycle.Hence at t’ = tl, T = tmin. Substituting in equation (8) give

Note: The moment of inertia is the angular obstruction of the rotating body. It is the product of the mass and a square of a distance from the axis of rotation.