Definition: A semiconductor device that generates coherent light of high intensity is known as laser diode. LASER is an abbreviation for Light Amplification by Stimulated Emission of Radiation. Stimulated emission is the basis of working of a laser diode.

Laser diode is similar to LED, however, different from LED, the PN junction of laser diode produces coherent radiation. Coherent radiation means the light waves generated by the device have the same frequency and phase.

The figure below shows the basic construction of a laser diode: 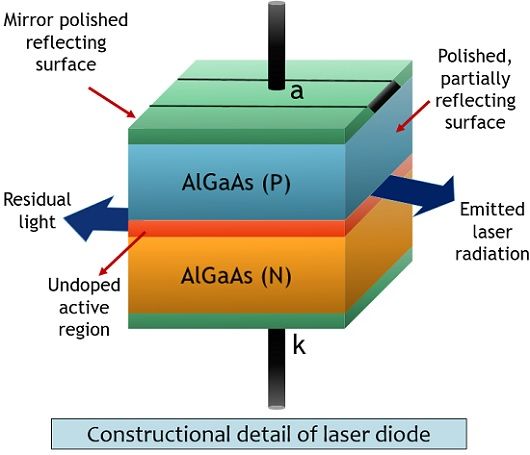 It is formed by doping aluminium or silicon to gallium arsenide material in order to generate n-type and p-type layer. Along with this, an additional active layer of undoped GaAs is placed between the two layers.

The thickness of this active layer is of few nanometers. The aim of sandwiching this layer in between p and n-type layers is to increase the area of electron and hole combination. Resultantly increasing the emitted radiation. The laser output is taken from active region of the laser diode.

In laser diodes, polishing at the two ends of the junction is done in order to provide a mirror-like surface. Through reflection from this surface, more electron and hole pair gets produced. Resultantly that produces more radiation through the device.

Let us first understand the process of absorption. 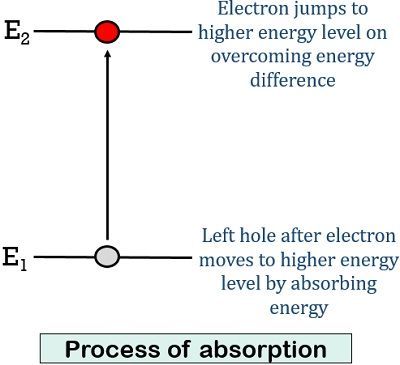 Initially, it is assumed that the atom is in the lower energy state i.e., E1. In order to have transition from a lower energy level to a higher one, the atom requires to overcome the energy difference between the two levels, given by, E2 – E1. 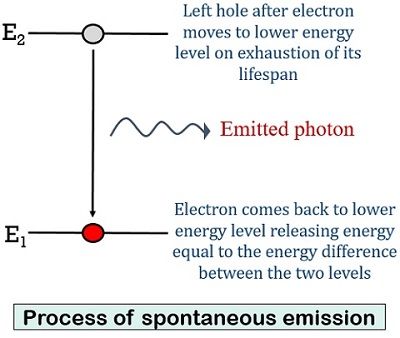 This energy is emitted by the atom in the form of electromagnetic wave, generating a photon of energy. This process is termed spontaneous emission.

This radiation emission phenomenon is usually seen in optoelectronic devices such as LED.

Let us now understand the process of stimulated emission

Suppose after absorption, the atom is present in the higher energy level before the exhaustion of its lifespan. So, an electromagnetic wave of frequency equal to the frequency of spontaneously emitted atom is provided to the atom.

This causes the atom to perform a transition from E2 to E1. Now, this time the atom will release the energy of two photons in this transition.

As we have incorporated the whole junction assembly with a partially reflecting mirror. Thus, this will cause back and forth movement of the atom. Resultantly, this will generate more photons.

As soon as the threshold is achieved, photons will get escaped from the mirror surface, a bright coherent radiation is emitted by the device.

As at the time of stimulated emission we are providing a photon energy to the atom. So, the emitted photons will be in the same phase with the incident photons. Thus, generating a monochromatic bright light.

The figure below shows the characteristic curve of a laser diode: 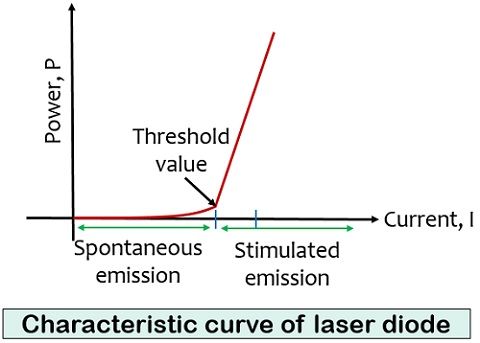 Here, horizontal line denotes current and vertical line shows the optical power of light produced. It can be clearly seen from the figure that a gradual increase in power is noticed until a threshold point is reached.

After the threshold value, a rapid increase in power is noticed even for a small increase in the current. The power produced by the laser diode also depends on the temperature associated with the device.

A laser light emitted by a laser diode holds the following property: