Definition: Nd:YAG laser is the short form used for Neodymium-doped Yttrium Aluminium Garnet. It is a solid state and 4 level system as it consists of 4 energy levels.

Nd ion is rare earth metal and it is doped with solid state host crystal like yttrium aluminium garnet (YAG – Y3Al5O12) to form Nd:YAG laser. Due to doping, yttrium ions get replaced by the Nd3+ ions. Also, the doping concentration is around 0.725% by weight.

Its working principle is such that when optical pumping is provided to the device. Then the Nd ions get raised to higher energy levels and their transition produces a laser beam.

This laser generally emits light of wavelength of nearly 1.064 μm.

Nd:YAG laser is basically categorized into 3 domains that are the active medium, pumping source and the optical resonator.

The figure below shows the road like the structure of Yd:YAG laser: 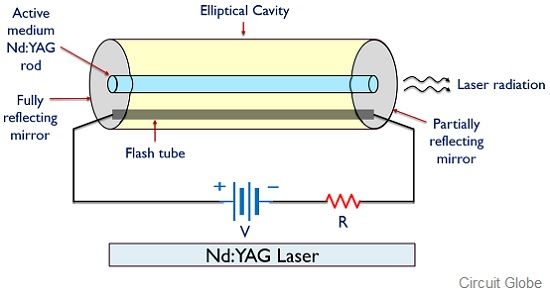 Active medium: This is also known as the laser medium and is the middle portion of the structure i.e., Nd:YAG crystal. Basically when the external energy source is provided then the electrons from lower energy state moves to higher energy state thereby causing lasing action to take place.

External Energy source: Due to the difference in the energy levels, the electrons need some external pumping in order to perform a transition from one state to another. So, for lasing action to take place an external pump source is required.

Basically, as a source of optical pumping, xenon or krypton flash tube is taken in its case.

The Nd:YAG rod and the flash tube are placed inside an elliptical cavity so, that maximum produced light can reach the rod.

While the other end is partially coated in order to provide a path for the light ray from an external source to reach the active medium. Thereby forming an optical cavity.

It is a 4 level systems i.e.; it contains 4 energy levels. So, in this section, we will discuss the working of Nd:YAG laser with the help of the energy level diagram.

The figure below shows the 4 state energy level diagram of Nd:YAG laser: 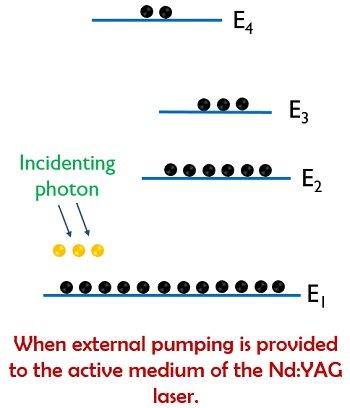 Here, E1 is the lowest energy state while E4 is the highest energy level. However, initially, electrons in E1 is very much higher as compared to E4.

So, when external energy is provided in the active medium of the laser. Then the electrons present in the energy state E1 gains energy and moves to energy state E4. However, as E4 is an unstable state and it exhibits short lifespan. 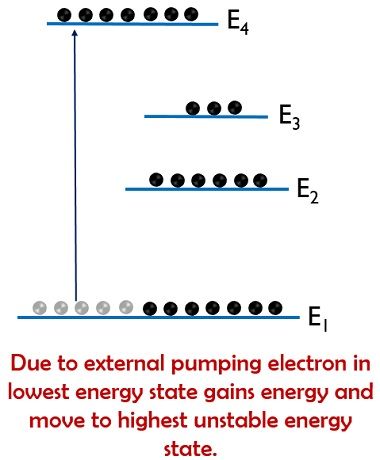 Therefore, electrons that were excited to this state by the application external pumping will not stay at this state for much longer duration and comes to lower energy state E3 very fastly but without radiating any photon. 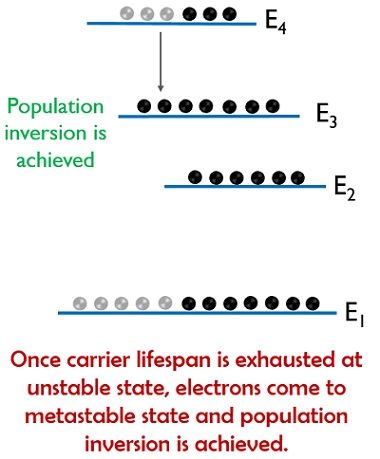 But once the lifetime of the electrons at the metastable state gets exhausted then these electrons by releasing photons come to lower energy state E2. 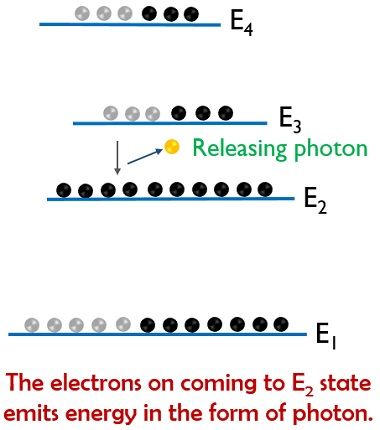 E2 also exhibit shorter lifespan like E4. Thus, electrons present in E2 state will come to E1 without radiating energy in the form of a photon. 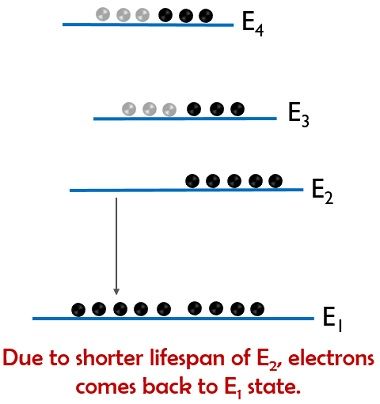 So, in this way electrons by gaining single photon of energy releases the energy of 2 photons. Also, as the system is equipped with optical resonators so, more number of photons will get generated as the pumped energy will get reflected inside the active medium.

These are used in military applications to find the desired target. This type of laser also finds its application in medical field for the surgical purpose. These are also used in welding and cutting of steel and in communication system also.