The word Hybrid means combination or mixture. The Hybrid Stepper Motor is a combination of the features of the Variable Reluctance Stepper Motor and Permanent Magnet Stepper Motor. In the center of the rotor, an axial permanent magnet is provided. It is magnetized to produce a pair of poles as North (N) and South (S) as shown in the figure below: 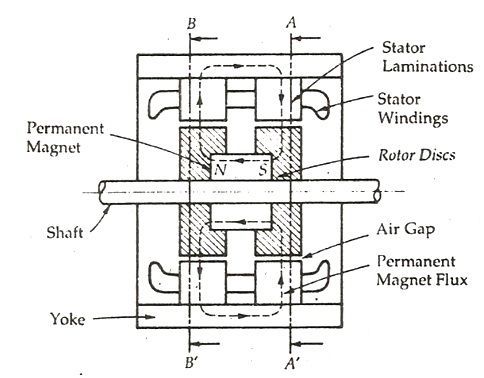 At both the end of the axial magnet the end caps are provided, which contains an equal number of teeth that are magnetized by the magnet. The figure of the cross-section of the two end caps of the rotor is shown below: 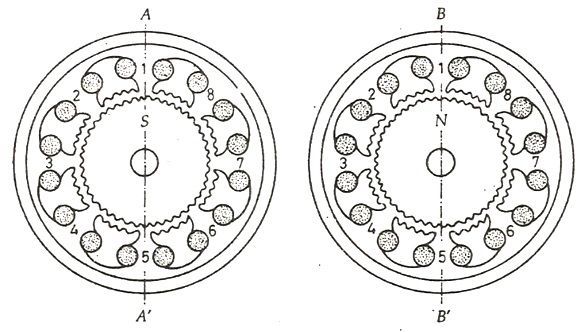 The stator has 8 poles, each of which has one coil and S number of teeth. There are 40 poles on the stator, and each end cap has 50 teeth. As the stator and rotor teeth are 40 and 50 respectively, the step angle is expressed as shown below:

The rotor teeth are perfectly aligned with the stator teeth. The teeth of the two end caps are displaced from each other by half of the pole pitch. As the magnet is axially magnetized, all the teeth on the left and right end cap acquire polarity as south and north pole respectively.

When the phase is excited by supplying a positive current, the stator poles 1 and 5 become south poles and stator pole 3 and 7 becomes north poles.

Now, when phase A is de-energized, and phase B is excited, the rotor will turn by a full step angle of 1.8⁰ in the anticlockwise direction. Phase A is now energized negatively; the rotor moves further by 1.8⁰ in the same anti-clockwise direction. Further rotation of the rotor requires phase B to be excited negatively. Thus, to produce anticlockwise motion of the rotor the phases are energized in the following sequence +A, +B, -A, -B, +B, +A…….. For the clockwise rotation, the sequence is +A, -B, +B, +A……..

One of the main advantages of the Hybrid stepper motor is that, if the excitation of the motor is removed the rotor continues to remain locked in the same position as before the removal of the excitation. This is because of the Detent Torque produced by the permanent magnet.

The advantages of the Hybrid Stepper Motor are as follows:

The Hybrid Stepper Motor has the following drawbacks:

This is all about Hybrid Stepper Motor.