In this scheme of protection, currents at the ends of the protected sections compare. When the system is in normal operating condition, the magnitude of currents is equal on the secondary windings of the current transformers. On the occurrence of the faults, the short-circuit current flows through the system and the magnitude of current become differ. This difference of current under fault conditions is made to flow through the relay operating coil.

The relay then closes its contacts and makes the circuit breaker to trip and thus isolated the protection from the system. Such a system is called a Merz-Prize circulating current system. It is very effective for earth faults and faults between phases. 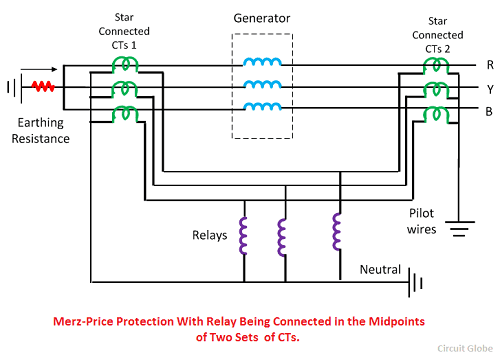 For proper working of the differential protection system, it is essential to locate the relay coils adjacent to the current transformer near the main circuit. This can be done by inserting the balancing resistance in series with the pilot wires to make equipotential points located near the main circuit breaker.

Consider the fault occurs on the R phase of the network because of the insulation breakdown. Because of the fault, the current in the secondary of the transformer becomes unequal. The differential currents flow through the relay coil. Thus, the relay becomes operative and gives the command to the circuit breaker for operation. 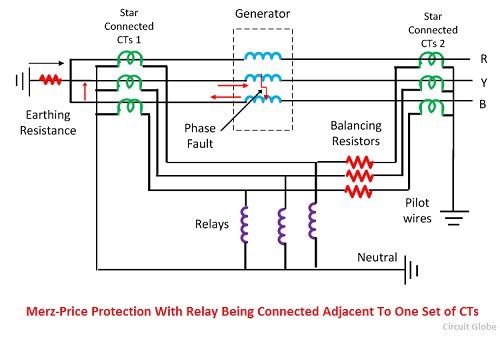 A neutral resistance wire is used in the differential protection system for avoiding the adverse effect of earth fault currents. When an earth fault occurs near the neutral, it will cause a small, short circuit current to flow through the neutral point because of small emf. This current is further reduced by the resistance of the neutral grounding. Thus, the small current will flow through the relay. This small current will not operate the relay coil, and hence the generator gets damage.

To overcome the above problem, the modified scheme has been developed. In this scheme two elements are arranged, one for the protection of the phase fault and other for the earth fault protection. 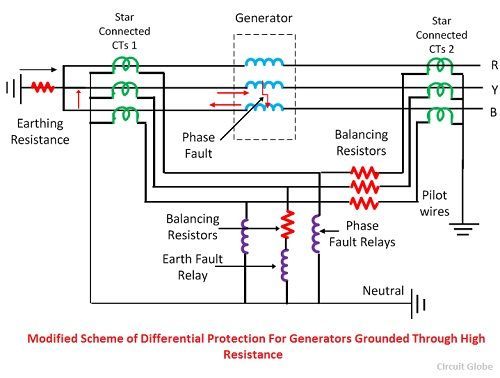 The star-connected circuit is symmetrical, and any balanced overflow current from the current circulating point will not flow through the earth fault relay. So in this system, the sensitive earth fault relay will operate at a high degree of stability.

6 thoughts on “Differential Protection of a Generator”