The one of the major difference between power and torque is that the power is the amount of work done by an object whereas the torque is the tendency of the force to rotate the object in a particular direction. Some other differences between them are explained below in the comparison chart

The power is the measure of the amount of work done, or in other words, power is defined as the amount of energy utilise per unit of time. It is measured in Joules/ seconds, and their SI unit is watt. The power is mainly classified into two types, i.e., the electrical power and the mechanical power.

The mechanical power is the amount of energy used in doing work. It is measured in joule/second.

The torque is the measure of the circular force whose effect can rotate the object. In other words, it is the product of the force and the distance. The torque is also called the twisting power.  The SI unit of torque is newton-meter and newton-meter is equivalent to joule. 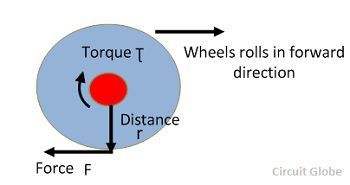 Examples of torque – For tightening or opening the cap of the bottle, we have applied force through the hand. The more force we apply, the more torque is increased. Also for tightening or loosing the nut through spanner and for twisting the steering of the car torque is applied.

The torque is expressed by the formula explained below.

Key differences between Power and Torque