The major difference between force and power is that force is an action on a body or interaction of two bodies. While power is the amount of energy consumed during an action over the body.

Sometimes people get confused between the terms force and power. This section will provide the necessary factors of differentiation between the two with the help of comparison chart.

Force is the outcome of the interaction between two entities either directly or indirectly. Or we can say it is a push or pull action performed on an object. It is basically an action that causes a change in the state of rest or state of motion of a body on which it is applied.

As we have discussed above that the interaction can be direct or indirect. Thus this leads to major classification of force,

Newton is the measuring unit of force and is given by:

Thus we can say 1 Newton is the force needed to provide a 1 Kg mass, an acceleration of 1m/s/s.

Due to the vector nature of force, both magnitude, as well as direction, are the resultant factors in its determination. Consider the figure given here: 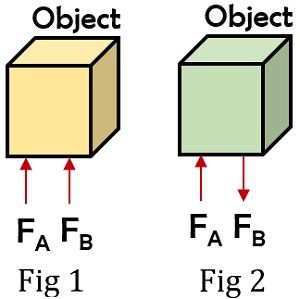 In figure (1), FA and FB both forces are acting in the same direction on an object. Thus the net force on the object will be the sum of both the forces acting on it. While in figure (2), the two forces are acting in the opposite direction on the object. Thus the net force will be the difference between the two forces simultaneously acting on it.

So, if the net force acting on a body is 0 then it will remain stationary. But if it is non-zero, then the body will experience either acceleration or deceleration.

It is basically defined as the amount of energy consumption when an action is performed. More specifically, we can say the rate of doing any work is known as power. So it can be expressed as

Watt is the measuring unit of power. Thus we can say that 1 watt is the power that does work at the rate of 1 Joule per second.

Consider the example of two labors A and B. Each has given a task to build a wall. So, both are doing the same work separately. But A has taken lesser time than B to do the work.

This clearly shows that A is doing the work with more power than B. Therefore, we can say the power of any person or a machine is the ratio of the work doing and the total time taken. We know that work is said to be done when a certain force is applied. So, we can have another formula for power using

We have seen every electrical appliance has some specified power. That power is nothing but the rate of consumption of electrical energy by it.

Key differences Between Force and Power

So, from this discussion, we can conclude that both force and power are the two important terms of science, but force specifies the interaction between objects while power specifies the rate at which any work is done.