Carrier current protection scheme is mainly used for the protection of the long transmission line. In the carrier, current protection schemes, the phase angle of the current at the two phases of the line are compared instead of the actual current. And then the phase angle of the line decides whether the fault is internal and external. The main elements of the carrier channel are a transmitter, receiver, coupling equipment, and line trap.

Line trap is inserted between the bus-bar and connection of coupling capacitor to the line. It is a parallel LC network tuned to resonance at the high frequency. The traps restrict the carrier current to the unprotected section so as to avoid interference from the with or the other adjacent carrier current channels. It also avoids the loss of the carrier current signal to the adjoining power circuit. 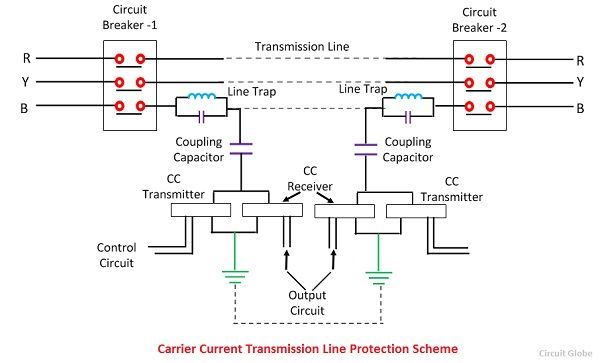 These types are explained below in details

In this protection schemes, the protection can be done by the comparison of a fault of the power flow direction at the two ends of the line. The operation takes place only when the power at both the end of the line is on the bus to a line direction.  After the direction comparison, the carrier pilot relay informs the equipment how a directional relay behaves at the other end to a short circuit.

The relay at both the end removes the fault from the bus. If the fault is in protection section the power flows in the protective direction and for the external fault power will flow in the opposite direction. During the fault, a simple signal through carrier pilot is transmitted from one end to the other. The pilot protection relaying schemes used for the protection of transmission are mainly classified into two types. They are

This system compares the phase relation between the current enter into the pilot zone and the current leaving the protected zone. The current magnitudes are not compared. It provided only main or primary protection and backup protection must be provided also. The circuit diagram of the phase comparison carrier protection scheme is shown in the figure below.

The transmission line CTs feeds a network that transforms the CTs output current into a single phase sinusoidal output voltage. This voltage is applied to the carrier current transmitter and the comparer. The output of the carrier current receiver is also applied to the comparer. The comparer regulates the working of an auxiliary relay for tripping the transmission line circuit breaker.

The following are the advantage of the carrier current protection schemes. These advantages are

The main operation of power line carrier has been for the purpose of supervisory control, telephone communication, telemeter and relaying.