The circuit containing only a pure capacitor of capacitance C farads is known as a Pure Capacitor Circuit. The capacitors stores electrical power in the electric field, their effect is known as the capacitance. It is also called the condenser.

The capacitor consists of two conductive plates which are separated by the dielectric medium. The dielectric material is made up of glass, paper, mica, oxide layers, etc. In pure AC capacitor circuit, the current leads the voltage by an angle of 90 degrees.

Explanation and derivation of Capacitor Circuit

A capacitor consists of two insulating plates which are separated by a dielectric medium. It stores energy in electrical form. The capacitor works as a storage device, and it gets charged when the supply in ON and gets discharged when the supply is OFF. If it is connected to the direct supply, it gets charged equal to the value of the applied voltage.

Let the alternating voltage applied to the circuit is given by the equation:

Charge of the capacitor at any instant of time is given as:

Current flowing through the circuit is given by the equation:

Where Xc = 1/ωC is the opposition offered to the flow of alternating current by a pure capacitor and is called Capacitive Reactance.

The value of current will be maximum when sin(ωt + π/2) = 1. Therefore, the value of maximum current Im will be given as:

Substituting the value of Im in the equation (4) we will get:

In the pure capacitor circuit, the current flowing through the capacitor leads the voltage by an angle of 90 degrees. The phasor diagram and the waveform of voltage, current and power are shown below:

The red colour shows current, blue colour is for voltage curve, and the pink colour indicates a power curve in the above waveform.

If you examine the curve carefully, you will notice that when the voltage attains its maximum value, the value of the current is zero that means there is no flow of current at that time.

The values of voltage and current are not maximised at the same time because of the phase difference as they are out of phase with each other by an angle of 90 degrees.

The phasor diagram is also shown in the waveform indicating that the current (Im) leads the voltage (Vm) by an angle of π/2.

Instantaneous power is given by p = vi 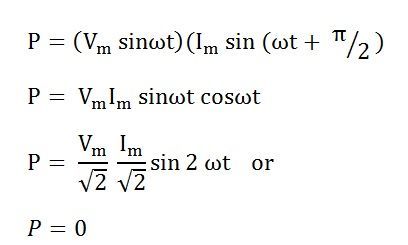 Hence, from the above equation, it is clear that the average power in the capacitive circuit is zero.

The average power in a half cycle is zero as the positive and negative loop area in the waveform shown are same.

In the first quarter cycle, the power which is supplied by the source is stored in the electric field set up between the capacitor plates. In the another or next quarter cycle, the electric field diminishes, and thus the power stored in the field is returned to the source. This process is repeated continuously and, therefore, no power is consumed by the capacitor circuit.