The circuit which contains only inductance (L) and not any other quantities like resistance and capacitance in the circuit is called a Pure inductive circuit. In this type of circuit, the current lags behind the voltage by an angle of 90 degrees.

The inductor is a type of coil which reserves electrical energy in the magnetic field when the current flow through it. The inductor is made up of wire which is wound in the form of a coil. When the current flowing through inductor changes then time-varying magnetic field causes emf which obstruct the flow of current.The inductance is measured in Henry.The opposition of flow of current is known as the inductive reactance.

Explanation and Derivation of Inductive Circuit

The circuit containing pure inductance is shown below:

Let the alternating voltage applied to the circuit is given by the equation:

As a result, an alternating current i flows through the inductance which induces an emf in it. The equation is shown below:

The emf which is induced in the circuit is equal and opposite to the applied voltage. Hence, the equation becomes, 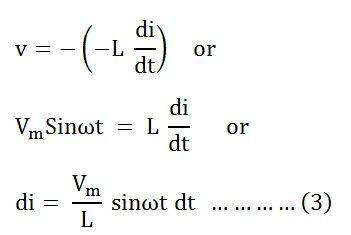 Integrating both sides of the equation (3), we will get

where, XL = ω L is the opposition offered to the flow of alternating current by a pure inductance and is called inductive reactance.

The current in the pure inductive AC circuit lags the voltage by 90 degrees. The waveform, power curve and phasor diagram of a purely inductive circuit is shown below

The phasor diagram is also shown on the left-hand side of the waveform where current (Im) lag voltage (Vm) by an angle of π/2.

Instantaneous power in the inductive circuit is given by 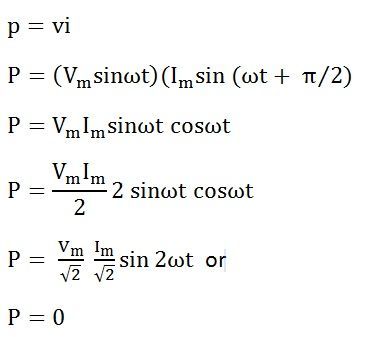 Hence, the average power consumed in a purely inductive circuit is zero.

The average power in one alteration, i.e., in a half cycle is zero, as the negative and positive loop is under power curve is the same.

This process continues in every cycle, and thus, no power is consumed in the circuit.