The circuit containing only a pure resistance of R ohms in the AC circuit is known as Pure Resistive AC Circuit. The presence of inductance and capacitance does not exist in a purely resistive circuit. The alternating current and voltage both move forward as well as backwards in both the direction of the circuit. Hence, the alternating current and voltage follows a shape of the Sine wave or known as the sinusoidal waveform.

Then the instantaneous value of current flowing through the resistor shown in the figure below will be: 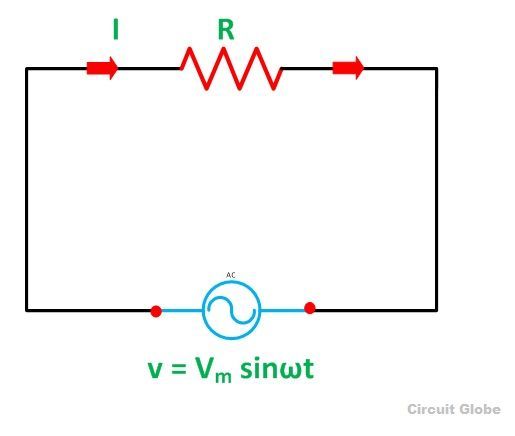 Putting the value of sinωt in equation (2) we will get

From equation (1) and (3), it is clear that there is no phase difference between the applied voltage and the current flowing through a purely resistive circuit, i.e. phase angle between voltage and current is zero. Hence, in an AC circuit containing pure resistance, the current is in phase with the voltage as shown in the waveform figure below.

Therefore, the instantaneous power in a purely resistive circuit is given by the equation shown below:

As the valve of cosωt is zero.

Hence, the power in a purely resistive circuit is given by:

The voltage and the current in the purely resistive circuit are in phase with each other having no phase difference with phase angle zero. The alternating quantity reaches their peak value at the interval of the same time period that is the rise and fall of the voltage and current occurs at the same time.