Leakage flux is defined as the magnetic flux which does not follow the particularly intended path in a magnetic circuit. Taking an example of solenoid you can explain the leakage flux and the fringing both.

When a current is passed through a solenoid, magnetic flux is produced by it. 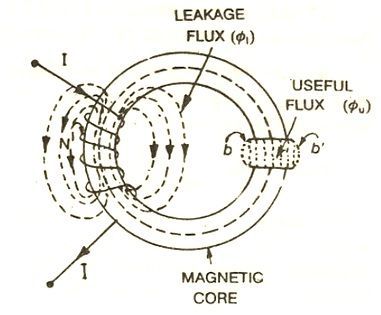 Most of the flux is set up in the core of the solenoid and passes through the particular path that is through the air gap and is utilised in the magnetic circuit. This flux is known as Useful flux φu.

As practically it is not possible that all the flux in the circuit follows a particularly intended path and sets up in the magnetic core and thus some of the flux also sets up around the coil or surrounds the core of the coil, and is not utilised for any work in the magnetic circuit. This type of flux which is not used for any work is called Leakage Flux and is denoted by φl.

Therefore, the total flux Φ produced by the solenoid in the magnetic circuit is the sum of the leakage flux and the useful flux and is given by the equation shown below:

The ratio of the total flux produced to the useful flux set up in the air gap of the magnetic circuit is called a leakage coefficient or leakage factor. It is denoted by (λ).

The useful flux when sets up in the air gap, it tends to bulge outward at (b and b’) as shown in above figure, because of this bulging, the effective area of the air gap increases and the flux density of the air gap decreases. This effect is known as Fringing.

Fringing is directly proportional to the length of the air gap that means if the length increases the fringing effect will also be more and vice versa.

16 thoughts on “Leakage Flux And Fringing”