The dc motor converts mechanical power into dc electrical power. One of the most important features of the dc motor is that their speed can easily be control according to the requirement by using simple methods. Such type of control is impossible in an AC motor.

Here equation (1) shows the speed is dependent upon the supply voltage V, the armature circuit resistance Ra and the field flux ϕ, which is produced by the field current.

For controlling the speed of DC Motor, the variation in voltage, armature resistance and field flux is taken into consideration. There are three general methods of speed control of a DC Motor.

They are as follows.

The detailed discussion of the various method of controlling the speed is given below. 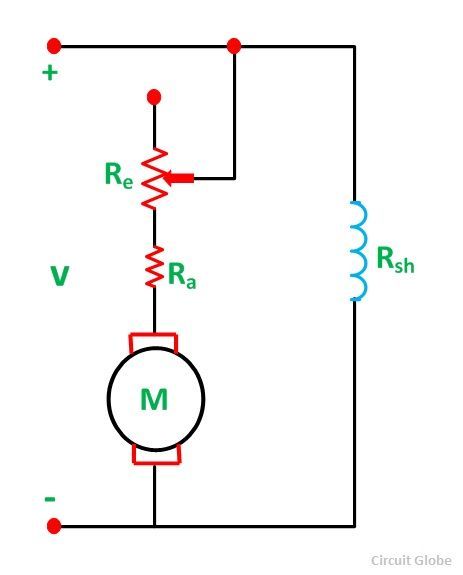 The speed current characteristic of the shunt motor is shown below. 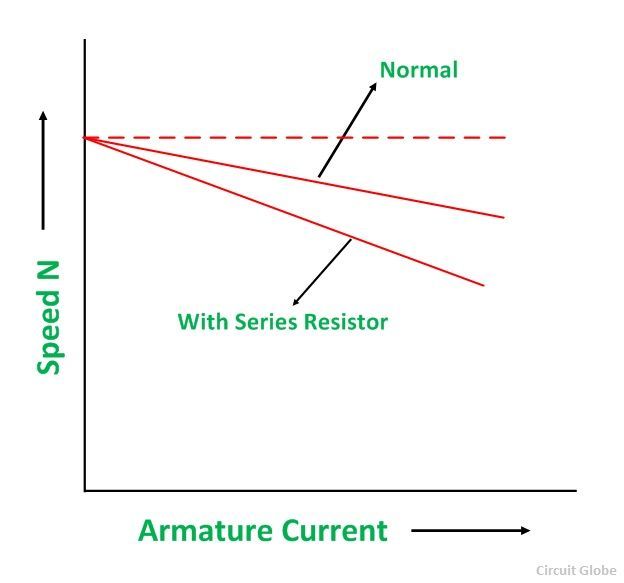 Now, let us consider a connection diagram of speed control of the DC Series motor by the armature resistance control method. 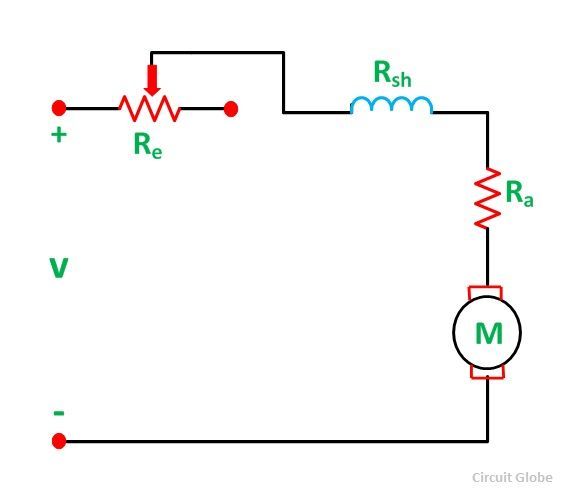 By varying the armature circuit resistance, the current and flux both are affected. The voltage drop in the variable resistance reduces the applied voltage to the armature, and as a result, the speed of the motor is reduced.

The speed–current characteristic of a series motor is shown in the figure below. 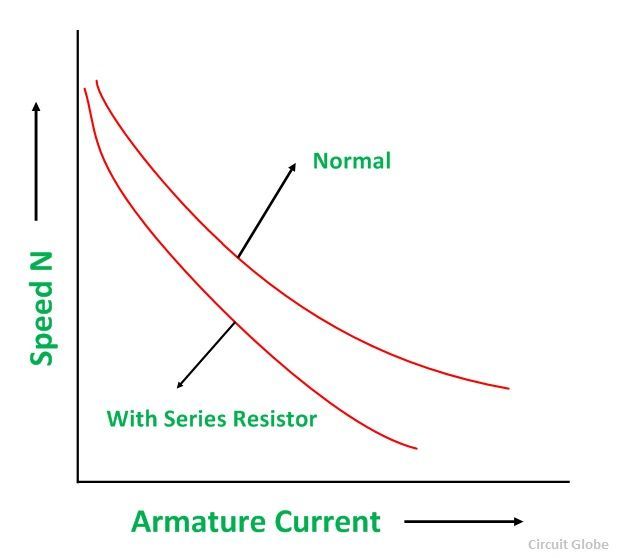 In a Shunt Motor, the variable resistor RC is connected in series with the shunt field windings as shown in the figure below. This resistor RC is known as a Shunt Field Regulator. 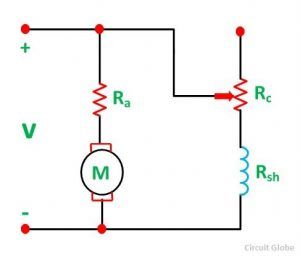 The shunt field current is given by the equation shown below:

The connection of RC in the field reduces the field current, and hence the flux is also reduced. This reduction in flux increases the speed, and thus, the motor runs at a speed higher than the normal speed.

Therefore, this method is used to give motor speed above normal or to correct the fall of speed because of the load.

The speed-torque curve for shunt motor is shown below: 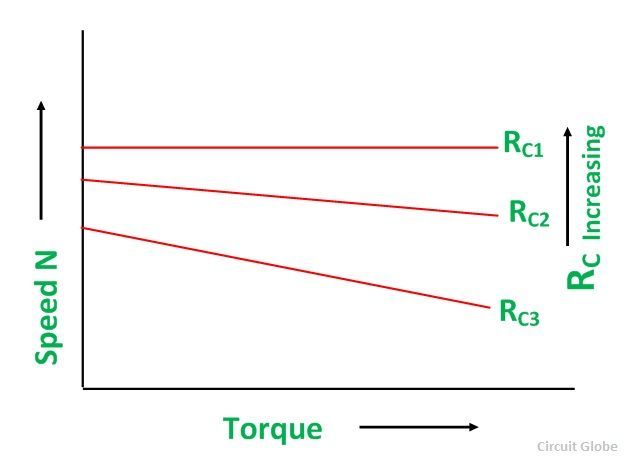 In a series motor, the variation in field current is done by anyone method, i.e. either by a diverter or by a tapped field control.

By Using a Diverter

A variable resistance Rd is connected in parallel with the series field windings as shown in the figure below: 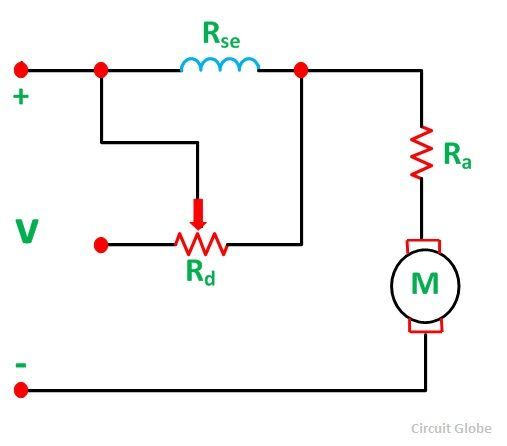 The parallel resistor is called a Diverter. A portion of the main current is diverted through a variable resistance Rd. Thus, the function of a diverter is to reduce the current flowing through the field winding. The reduction in field current reduces the amount of flux and as a result the speed of the motor increases.

The second method used in a series motor for the variation in field current is by tapped field control. The connection diagram is shown below: 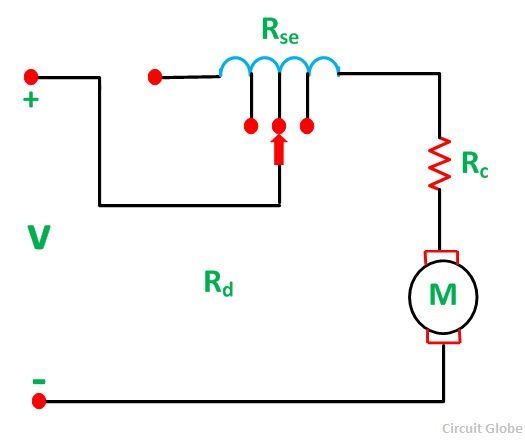 Here the ampere-turns are varied by varying the number of field turns. This type of arrangement is used in an electric traction system. The speed of the motor is controlled by the variation of the field flux.

The speed-torque characteristic of a series motor is shown below. 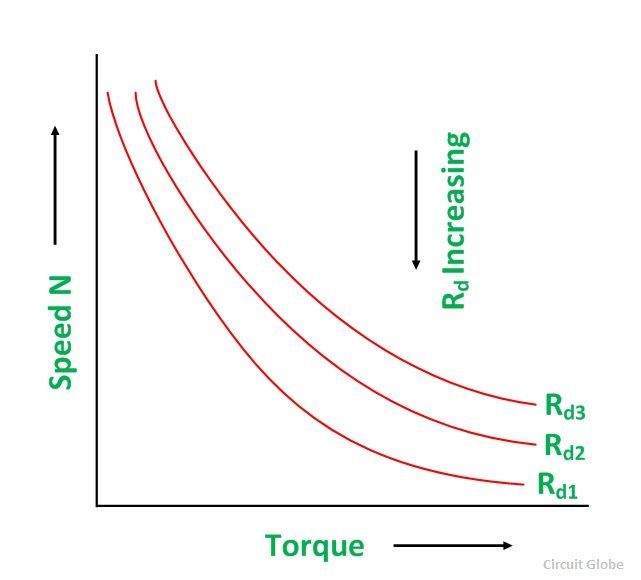 The following are the advantages of the field flux control method.

The flux cannot usually be increased beyond its normal values because of the saturation of the iron. Therefore, speed control by flux is limited to the weakening of the field, which gives an increase in speed.

This method is applicable over only to a limited range because if the field is weakened too much, there is a loss of stability.