The phenomenon of flux density B lagging behind the magnetizing force H in a magnetic material is known as Magnetic Hysteresis. The word Hysteresis is derived from the Greek word Hysterein means to lag behind.

In other words, when the magnetic material is magnetized first in one direction and then in the other direction, completing one cycle of magnetization, it is found that the flux density B lags behind the applied magnetization force H. 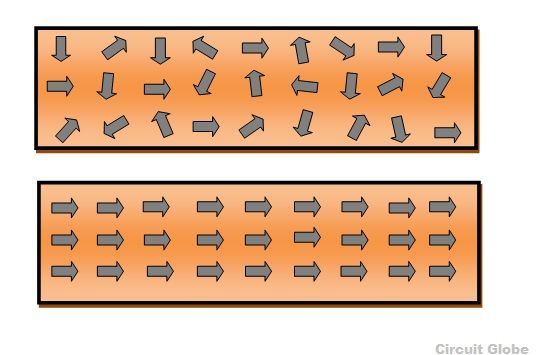 As soon as the magnetic field is applied to the ferromagnetic material, its dipole moments align themselves in one particular direction as shown in the above figure, resulting in a much stronger magnetic field.

For understanding the phenomenon of the magnetic hysteresis, consider a ring of magnetic material wound uniformly with solenoid. The solenoid is connected to a DC source through a Double pole double throw (D.P.D.T) reversible switch as shown in the figure below: 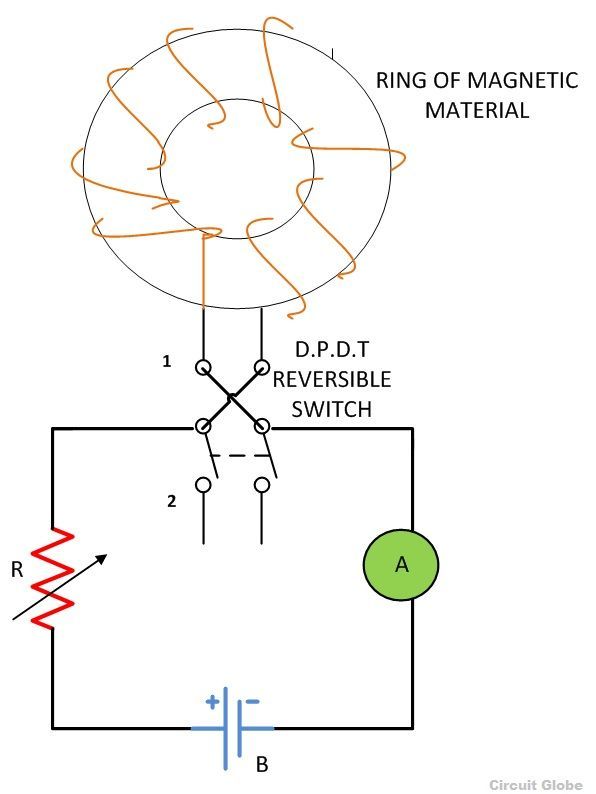 Initially, the switch is in position 1. By decreasing the value of R the value of the current in the solenoid increases gradually resulting in a gradual increase in field intensity H, the flux density also increases till it reaches the saturation point a and the curve obtained is ‘oa‘. Saturation occurs when on increasing the current, dipole moment or the molecules of the magnet material align itself in one direction.

Now by decreasing the current in the solenoid to zero the magnetizing force is gradually reduced to zero. But the value of flux density will not be zero as it still has the value ‘ob‘ when H=0, so the curve obtained is ‘ab‘ as shown in the figure below. This value ‘ob‘ of flux density is because of the residual magnetism.

The value of the flux density ob retained by the magnetic material is called residual magnetism, and the power of retaining it is known as Retentivity of the material.

Now to demagnetize the magnetic ring, the position of the D.P.D.T reversible switch is changed to position 2 and thus, the direction of flow of the current in the solenoid is reversed resulting in reverse magnetizing force H.

When H is increased in reverse direction, the flux density starts decreasing and becomes zero (B=0) and the curve shown above follows the path bc. The residual magnetism of the material is removed by applying the magnetizing force known as Coercive force in the opposite direction.

The value of the magnetizing force oc required to wipe out the residual magnetism ob is called Coercive force shown by pink color in the hysteresis curve shown above.

The position of the switch is changed to 1 again from position 2 and the current in the solenoid is again increased as done in the magnetization process and due to this H is increased in the positive direction tracing the path as ‘efa’, and finally, the hysteresis loop is complete. In the curve again ‘of’ is the magnetizing force, also known as the Coercive force required to remove the residual magnetism ‘oe’.

Here the total Coercive force required to wipe off the residual magnetism in one complete cycle is denoted by ‘cf’. From the above discussion, it is clear that the flux density B always lags behind the magnetizing force H. Hence the loop ‘abcdefa’ is called the Magnetic Hysteresis loop or Hysteresis Curve.

The soft magnetic material has a narrow magnetic hysteresis loop as shown in the figure below which has a small amount of dissipated energy. They are made up of material like iron, silicon steel, etc.

The Hard magnetic material has a wider hysteresis loop as shown in the figure below and results in a large amount of energy dissipation and the demagnetization process is more difficult to achieve.