Definition: The lightning arrester which consists the single or multi-gaps connected in series with the current controlling element, such type of arrester is known as the lightning arrester. The gap between the electrodes intercepts the flow of current through the arrester except when the voltage across the gap raises beyond the critical gap flashover. The valve type arrester is also known as gap surge diverter or silicon carbide surge diverter with a series gap.

The valve type arrester consists of a multiple spark gap assembly in series with the resistor of nonlinear element. The each spark gap has two elements. For non-uniform distribution between the gap, the non-linear resistors are connected in parallel across the each gap. 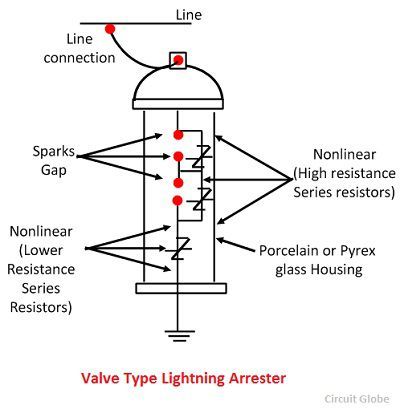 The resistor elements are made up of silicon carbide with inorganic binders. The whole arrangement is enclosed in a sealed porcelain housing filled with nitrogen gas or SF6 gas.

For low voltage, there is no spark-over across the gaps due to the effect of parallel resistor. The slow changes in applied voltage are not injurious to the system. But when the rapid changes in voltage occur across the terminal of the arrester the air gap spark of the current is discharged to ground through the non-linear resistor which offers very small resistance. 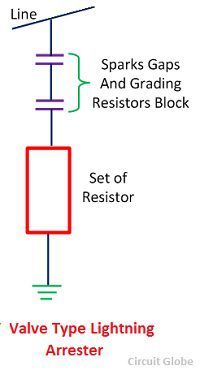 After the passage of the surge, the impressed voltage across the arrester falls, and the arrester resistance increases until the normal voltage restores. When the surge diverter disappears, a small current at low power frequency flow in the path produced by the flash over. This current is known as the power follow current.

The magnitude of the power follows current decreases to the value which can be interrupted by the spark gap as they recover their dielectric strength. The power follow current is extinguished at the first current and the supply remains uninterrupted. The arrester is ready for the normal operation.This is called resealing of the lightning arrester.

When the surge reaches the transformer, it meets the lightning arrester as shown in the figure below. For approximately 0.25μs the voltage attained the breakdown value of the series gap and the arrester discharge.

When the surge voltage increases, the resistance of non-linear element drops, thus allowing the further surge energy to discharge. So restricted the voltage transmitted to the terminal equipment as illustrated in the figure below. 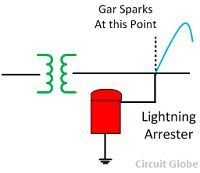 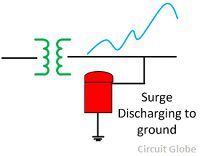 When the voltage reduces, the current passes to the ground also decreases while the resistance increases. The lightning arrester attaining a stage when the current flow is interrupted by the spark gap and the arrester is sealed again.

The maximum voltage developed across the arrester terminal and transmitted to the terminal equipment is known as the discharge value of the arrester.

The valve type lightning arrester may be station types, line types, arresters for the protection of the rotating machine distribution type or secondary type.

Station Type Valve Lightning Arrester – This type of valve is mainly employed for the protection of the critical power equipment in the circuit of 2.2kV to 400kV and higher. They have the high capacity of energy dissipation.

Line Type Lightning Arrester – The line type arresters are used for the protection of substation equipment. Their cross-sectional area is smaller, lighter in weight and cheaper in cost. They permit higher surge voltage across their terminal in comparison to station type and have lower surge carrying capacity.

Distribution arrester – Such type of arrester is usually mounted on the pole and are employed for the protection of the generators and motors.