Mechanism of the Lightning Discharge

In the atmosphere, the positive, as well as the negative ions in the air, attach themselves to the small dust particles. The water drops present in the air also get charged because of polarisation by induction. These charged particles and water drops charged the clouds. The positive ions are collected in the upper region, and the negative ions are collected in the lower region of the cloud because of their mass.

When the pilot steamer reaches near the earth, the electric field intensity increases and due to this, the charges of an opposite polarity in the form of a short steam rises from the earth to meet the tip of downward leader. When a contact is made between the pilot leader and the short upward steamer, a return streamer travel from the earth to cloud along the ionised channel formed by the pilot leader. The return steamer moves very fast and produces the well known, intensely luminous lightning flash.

The charge of the other charge centre is first transferred to the first one, and then it passes to the earth through the ionised channel made by the first discharge. The second’s discharge is unbranched and without steps. Its velocity is more than that of the pilot leader. This is known as the dart leader, and it is also followed by the return strokes.

Similarly, the other charges are discharged to the earth in the form of leader and return strokes along the same ionised channel. Lightning strokes with any discharge are known as multiple or repetitive strokes. The lightning is called referred to as hot or cold depending upon the magnitude and duration of the stroke. 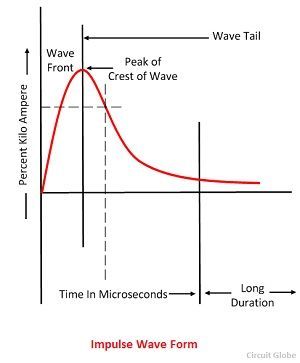 Where the ∝ and β show the constants which determine the shapes. The waves are defined by times t1 and t2 in milliseconds. The times to reach the impulse current or voltage to its maximum amplitude is denoted by t1, while t2 denotes the times when the current or voltages has fallen to one-half of its peak value.

The lightning stroke affects the lines in two ways

These ways are explained below in details.

In the direct lightning strokes, the cloud attains a large amount of charge and induces an opposite charge on taller objects such as temple, churches or mosques. When the intensity of electrostatic field becomes sufficiently great to ionise the neighbouring air, the air break down and discharge takes place between the cloud and the object. Such types of discharge take a long time to produce, and it strikes the highest and the most sharply pointed building in the neighbourhood. 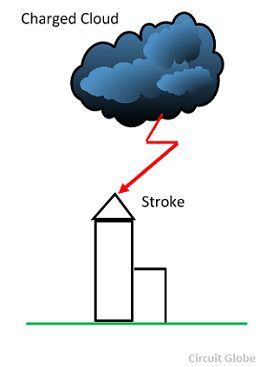 Consider the three clouds, clouds 1 and 3 are positively charged, and cloud 2 is negatively charged as shown in the figure below. 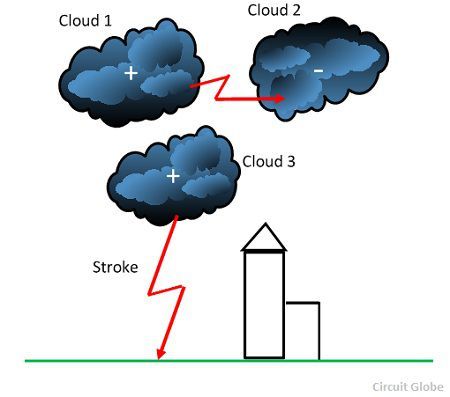 The potential of cloud 3 is reduced due to the presence of the charged cloud 2. On the flash over from Cloud 1 to Cloud 2, both these clouds are discharged rapidly, and class 3 assumes a much potential and flashes to earth very rapidly. It is the most dangerous strokes because it ignores taller building and reaches directly to the ground. This stroke is called the induces strokes.