The DC generator converts mechanical power into electrical power. The magnetic flux in a DC machine is produced by the field coils carry current. The circulating current in the field windings produces a magnetic flux, and the phenomenon is known as Excitation.

DC Generator is classified according to the methods of their field excitation.

The detailed description of the various types of generators is explained below.

In this type of DC generator, there is no field winding is placed around the poles. The field produced by the poles of these machines remains constant. Although these machines are very compact but are used only in small sizes like dynamos in motorcycles, etc.

The main disadvantage of these machines is that the flux produced by the magnets deteriorates with the passage of time which changes the characteristics of the machine.

A DC generator whose field winding or coil is energised by a separate or external DC source is called a separately excited DC Generator. The flux produced by the poles depends upon the field current with the unsaturated region of magnetic material of the poles. i.e. flux is directly proportional to the field current. But in the saturated region, the flux remains constant.

The figure of self-excited DC Generator is shown below: 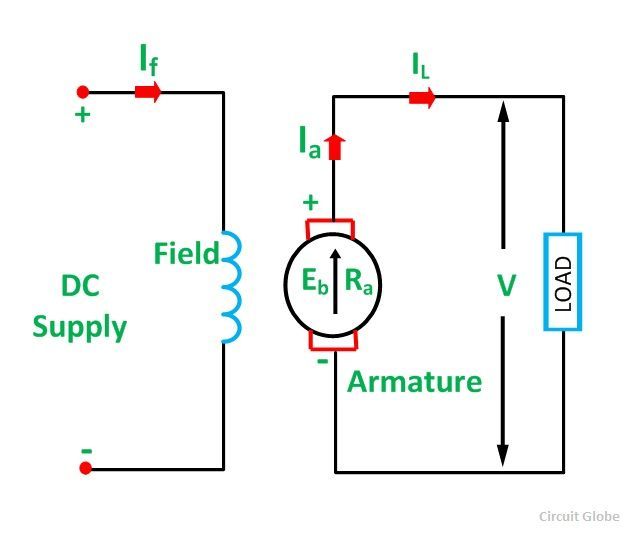 Ia = IL where Ia is the armature current and IL is the line current.

Terminal voltage is given as:

If the contact brush drop is known, then the equation (1) is written as:

The power developed is given by the equation shown below:

Power output is given by equation (4) shown above.

The self-excited DC Generator is further classified as

In a shunt-wound generator, the field winding is connected across the armature winding forming a parallel or shunt circuit. Therefore, the full terminal voltage is applied across it. A very small field current Ish, flows through it because this winding has many turns of fine wire having very high resistance Rsh of the order of 100 ohms.

The connection diagram of shunt-wound generator is shown below: 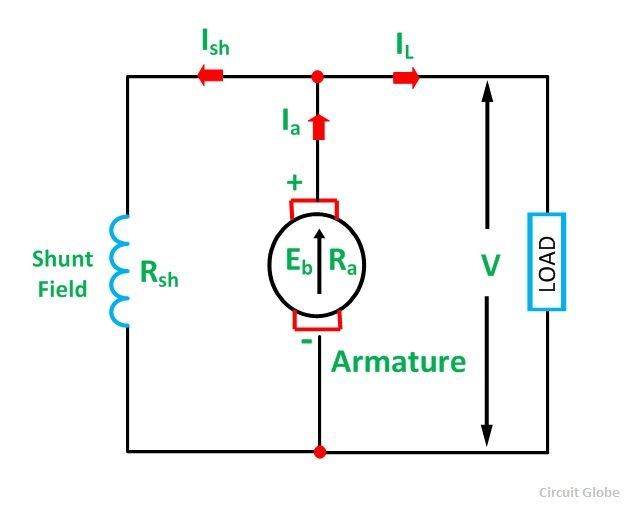 The shunt field current is given as:

Where Rsh is the shunt field winding resistance.

The current field Ish is practically constant at all loads. Therefore, the DC shunt machine is considered to be a constant flux machine.

Armature current is given as:

Terminal voltage is given by the equation shown below:

If the brush contact drop is included, the equation of the terminal voltage becomes

A series-wound generator the field coils are connected in series with the armature winding. The series field winding carries the armature current.

The series field winding consists of a few turns of wire of thick wire of larger cross-sectional area and having low resistance usually of the order of less than 1 ohm because the armature current has a very large value.

Its convectional diagram is shown below: 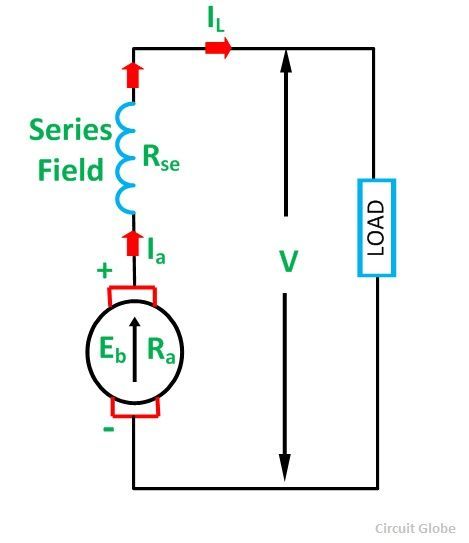 Series field current is given as:

Rse is known as the series field winding resistance.

Terminal voltage is given as:

If the brush contact drop is included, the terminal voltage equation is written as:

For a detailed study of the compound-wound generator, refer the topic Compound Wound Generator.