The Torque Slip Characteristic is represented by a rectangular hyperbola. For the immediate value of the slip, the graph changes from one form to the other. Thus, it passes through the point of maximum torque when R2 = sX20. The maximum torque developed in an induction motor is called the Pull Out Torque or the Breakdown Torque. This torque is a measure of the short time overloading capability of the motor.

The torque slip characteristic curve is divided roughly into three regions. They are as follows:

The torque equation of the induction motor is given below:

If R2 is constant, the torque becomes

From equation (1) shown above, it is clear that the torque is proportional to slip. Hence, in the normal working region of the motor, the value of the slip is small. The torque slip curve is a straight line.

As the slip increases, the speed of the motor decreases with the increase in load. The term (sX20)2 becomes large. The term R22 may be neglected in comparison with the term (sX20)2 and the torque equation becomes as shown below:

At the standstill condition, the torque is inversely proportional to the slip.

Beyond the maximum torque point, the value of torque starts decreasing. As a result, the motor slows down and stops. At this stage, the overload protection must immediately disconnect the motor from the supply to prevent damage due to overheating of the motor.

The curve shown below shows the Torque Slip Characteristic of the induction motor: 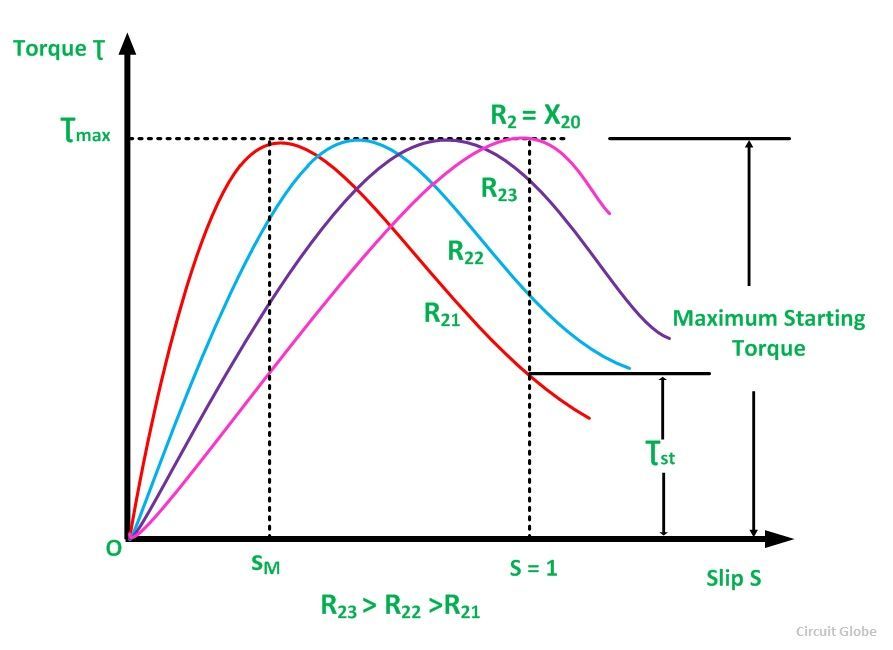 This is all about the torque slip characteristic of an induction motor.

1 thought on “Torque Slip Characteristic of an Induction Motor”