Shunt capacitance charges the transmission line when the circuit breaker at the sending end of the line is close. As shown below

The series inductance of the line consumes the electrical energy when the sending and receiving end terminals are closed.

And it is calculated by the formula given below

If Po is its natural load of the lines, (SIL)1∅ of the line per phase

Since the load is purely resistive, 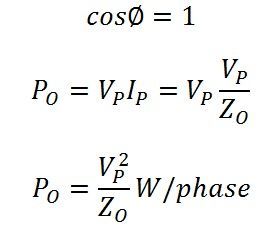 Thus, per phase power transmitted under surge impedance loading is (VP2)/ZO watts, Where Vp is the phase voltage.

If kVL is the receiving end voltage in kV, then

If the shunt conductance and resistance are neglected and SIL is equal to the load than the voltage at both the ends will be equal.