Definition: Series compensation is the method of improving the system voltage by connecting a capacitor in series with the transmission line. In other words, in series compensation, reactive power is inserted in series with the transmission line for improving the impedance of the system. It improves the power transfer capability of the line. It is mostly used in extra and ultra high voltage line.

If a capacitor having capacitance reactance Xc is connected in series with the line, the reactance of the line is reduced from XL to ( XL– Xc). The power transfer is given by

compensation is given by the equation

Thus, the power transfer is doubled by 50 % compensation.

where I is the line current. Capacitor banks consist of small units connected in series, parallel, or both to get the desired voltage and Var rating.

When the fault or overload occurs the large current will flow across the series capacitor of the line. Thus, the excessive voltage drop occurs across the transmission line. For protecting the capacitors from such abnormal voltages, spark gaps and surge diverter are connected to the capacitor terminal. A circuit breaker is also connected in parallel with it. Some of the methods of series capacitor are shown below. 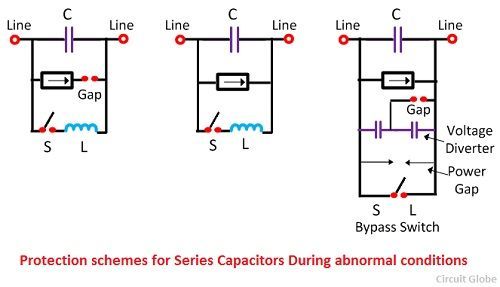