When two or more conductors are placed near to each other, then their electromagnetic fields interact with each other. Due to this interaction, the current in each of them is redistributed such that the greater current density is concentrated in that part of the strand most remote from the interfering conductor. 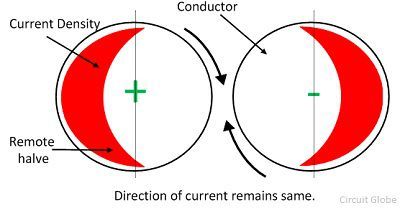 The proximity effect is important only for conductor sizes greater than 125 mm2.Correction factors are to be applied to take this fact into account.

The resistance Rdc is known from stranded tables.

The proximity effect mainly depends on the factors like conductors material, conductor diameter, frequency and conductor structure. The factors are explained below in details

How to reduce Proximity Effect?

The proximity effect can be reduced by using the ACSR (Aluminum Core Steel Reinforced) conductor. In ACSR conductor the steel is placed at the centre of the conductor and the aluminium conductor is positioned around steel wire.