The principle of hall effect transducer is that if the current carrying strip of the conductor is placed in a transverse magnetic field, then the EMF develops on the edge of the conductor. The magnitude of the develop voltage depends on the density of flux, and this property of a conductor is called the Hall effect. The Hall effect element is mainly used for magnetic measurement and for sensing the current.

The metal and the semiconductor has the property of hall effect which depends on the densities and the mobility of the electrons.

Consider the hall effect element shown in the figure below. The current supply through the lead 1 and 2 and the output is obtained from the strip 3 and 4. The lead 3 and 4 are at same potential when no field is applied across the strip. 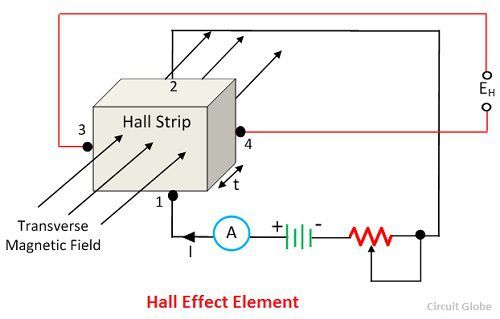 When the magnetic field is applied to the strip, the output voltage develops across the output leads 3 and 4. The develops voltage is directly proportional to the strength of the material.

The output voltage is,

The current and magnetic field strength both can be measured with the help of the output voltages. The hall effect EMF is very small in conductors because of which it is difficult to measure. But semiconductors like germanium produces large EMF which is easily measured by the moving coil instrument.

The following are the application of the Hall effect Transducers.

The Hall Effect transducer requires small space and also gives the continuous signal concerning the magnetic field strength. The only disadvantage of the transducer is that it is highly sensitive to temperature and thus calibration requires in each case.

2. Measurement of Displacement – The Hall effect element measures the displacement of the structural element. For example – Consider the ferromagnetic structure which has a permanent magnet. 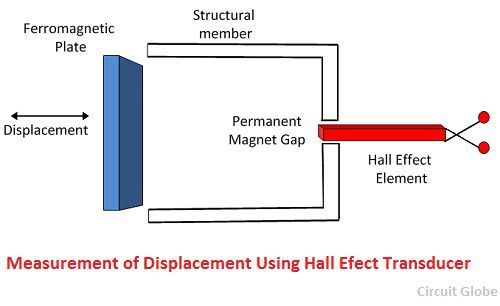 3. Measurement of Current – The hall effect transducer is also used for measuring the current without any physical connection between the conductor circuit and meter.

4. Measurement of Power – The hall effect transducer is used for measuring the power of the conductor. The current is applied across the conductor, which develops the magnetic field. The intensity of the field depends on the current. The magnetic field induces the voltage across the strip. The output voltage of the multiplier is proportional to the power of the transducer.