Pole Changing Method is one of the main methods of the speed control of an induction motor. This method of controlling the speed by pole changing is used mainly for cage motor only because the cage rotor automatically develops a number of poles, which is equal to the poles of the stator winding.

The number of stator poles can be changed by the following three methods:

A detailed explanation of each pole changing method is given below:

In the multiple stator winding method, two windings are provided on the stator, wounded on two different numbers of poles. One winding is energized at a time. Let us consider that the motor has two windings for 6 and 4 poles. For the frequency of 50 hertz, the synchronous speeds will be 1000 and 1500 revolutions per minute respectively. This method of speed control is less efficient and more costly.

The figure below shows the single phase of a stator winding which consists of 4 coils. The coils are divided into two groups namely a-b and c-d. 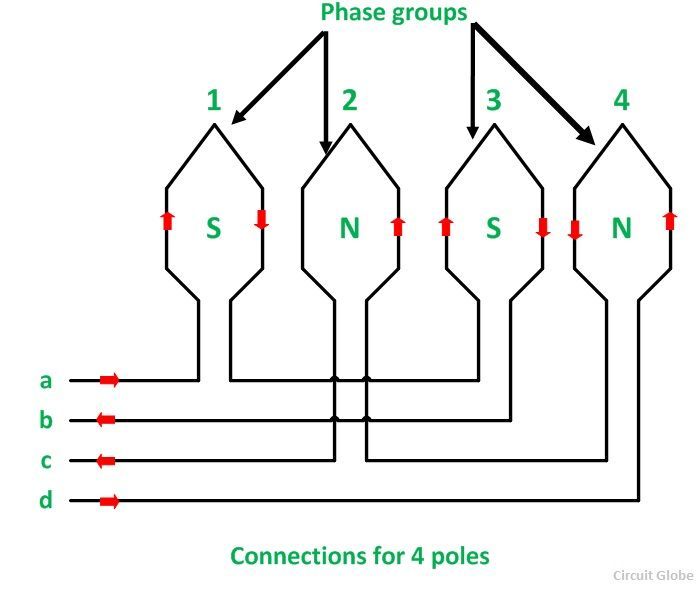 Group a-b consists of an odd number of coils that is (1, 3) whereas group c-d consists of an even number of coils (2,4). The two coils are connected in series. The terminals a, b, c, d are taken out as shown in the above figure. The coils are carrying current in the given directions by connecting coil groups either in series or in parallel as shown in the figure below:

There are total of four poles which are giving a speed of 1500 rpm for a 50-hertz system. If the current through the coils of group a-b is reversed as shown in the figure below. All the coils will produce north (N) poles. 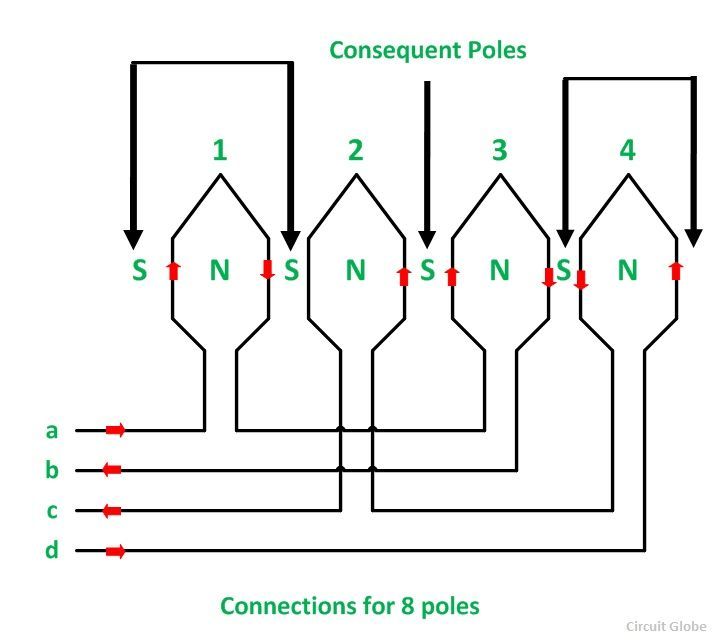 The flux of the pole group should be passed through the given space between the pole group to complete the magnetic path. Thus, a magnetic pole of opposite polarity (S pole) is induced. These induced poles are known as Consequent Poles. Thus, the machine has twice as many poles as before (i.e., 8 poles), and the synchronous speed becomes half of the previous speed (i.e., 750 rpm).