Definition: The battery which uses sponge lead and lead peroxide for the conversion of the chemical energy into electrical power, such type of battery is called a lead acid battery. The lead acid battery is most commonly used in the power stations and substations because it has higher cell voltage and lower cost.

1. Container – The container of the lead acid battery is made of glass, lead lined wood, ebonite, the hard rubber of bituminous compound, ceramic materials or moulded plastics and are seated at the top to avoid the discharge of electrolyte. At the bottom of the container, there are four ribs, on two of them rest the positive plate and the others support the negative plates.

The prism serves as the support for the plates and at the same time protect them from a short-circuit.The material of which the battery containers are made should be resistant to sulfuric acid, should not deform or porous, or contain impurities which damage the electrolyte. 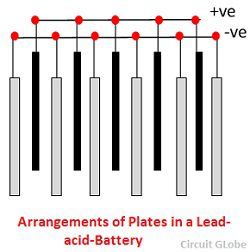 The grids are made up of an alloy of lead and antimony. These are usually made with the transverse rib that crosses the places at a right angle or diagonally. The grid for the positive and negative plates are of the same design, but the grids for the negative plates are made lighter because they are not as essential for the uniform conduction of the current.

The plates of the battery are of two types. They are the formed plates or plante plates and pasted or faure plates.

Plante’s plates are used largely for stationary batteries as these are heavier in weight and more costly than the pasted plates. But the plates are more durable and less liable to lose active material by rapid charging and discharging. The plantes plate has low capacity weight-ratio.

Faure process is much suitable for manufacturing of negative plates rather than positive plates. The negative active material is quite tough, and it undergoes a comparatively low change from charging and discharging.

3. Active Material – The material in a cell which takes active participation in a chemical reaction (absorption or evolution of electrical energy) during charging or discharging is called the active material of the cell. The active elements of the lead acid are

The lead peroxide and sponge lead, which form the negative and positive active materials have the little mechanical strength and therefore can be used alone.

4. Separators – The separators are thin sheets of non-conducting material made up of chemically treated leadwood, porous rubbers, or mats of glass fibre and are placed between the positive and negative to insulate them from each other. Separators are grooved vertically on one side and are smooth on the other side.

When the sulfuric acid dissolves, its molecules break up into positive hydrogen ions (2H+) and sulphate negative ions (SO4—) and move freely. If the two electrodes are immersed in solutions and connected to DC supply then the hydrogen ions being positively charged and moved towards the electrodes and connected to the negative terminal of the supply. The SO4— ions being negatively charged moved towards the electrodes connected to the positive terminal of the supply main (i.e., anode). 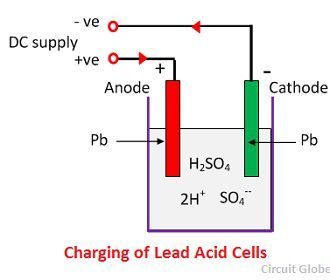 Each hydrogen ion takes one electron from the cathode, and each sulphates ions takes the two negative ions from the anodes and react with water and form sulfuric and hydrogen acid.

The oxygen, which produced from the above equation react with lead oxide and form lead peroxide (PbO2.) Thus, during charging the lead cathode remain as lead, but lead anode gets converted into lead peroxide, chocolate in colour.

When the cell is full discharge, then the anode is of lead peroxide (PbO2) and a cathode is of metallic sponge lead (Pb). When the electrodes are connected through a resistance, the cell discharge and electrons flow in a direction opposite to that during charging. 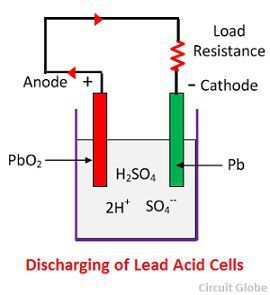 The each sulphate ion (SO4—) moves towards the cathode and reaching there gives up two electrons becomes radical SO4, attack the metallic lead cathode and form lead sulphate whitish in colour according to the chemical equation.

For recharging, the anode and cathode are connected to the positive and the negative terminal of the DC supply mains. The molecules of the sulfuric acid break up into ions of 2H+ and SO4—. The hydrogen ions being positively charged moved towards the cathodes and receive two electrons from there and form a hydrogen atom. The hydrogen atom reacts with lead sulphate cathode forming lead and sulfuric acid according to the chemical equation. 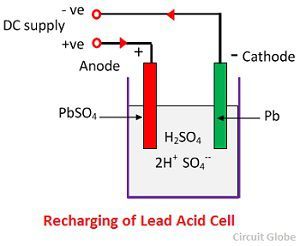 SO4— ion moves to the anode, gives up its two additional electrons becomes radical SO4, react with the lead sulphate anode and form leads peroxide and lead sulphuric acid according to the chemical equation.

The charging and discharging are represented by a single reversible equation given below. 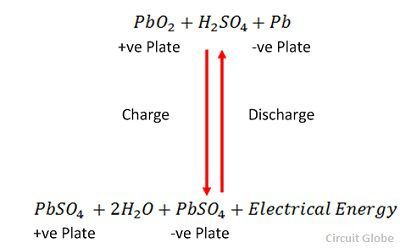 The equation should read downward for discharge and upward for recharge.